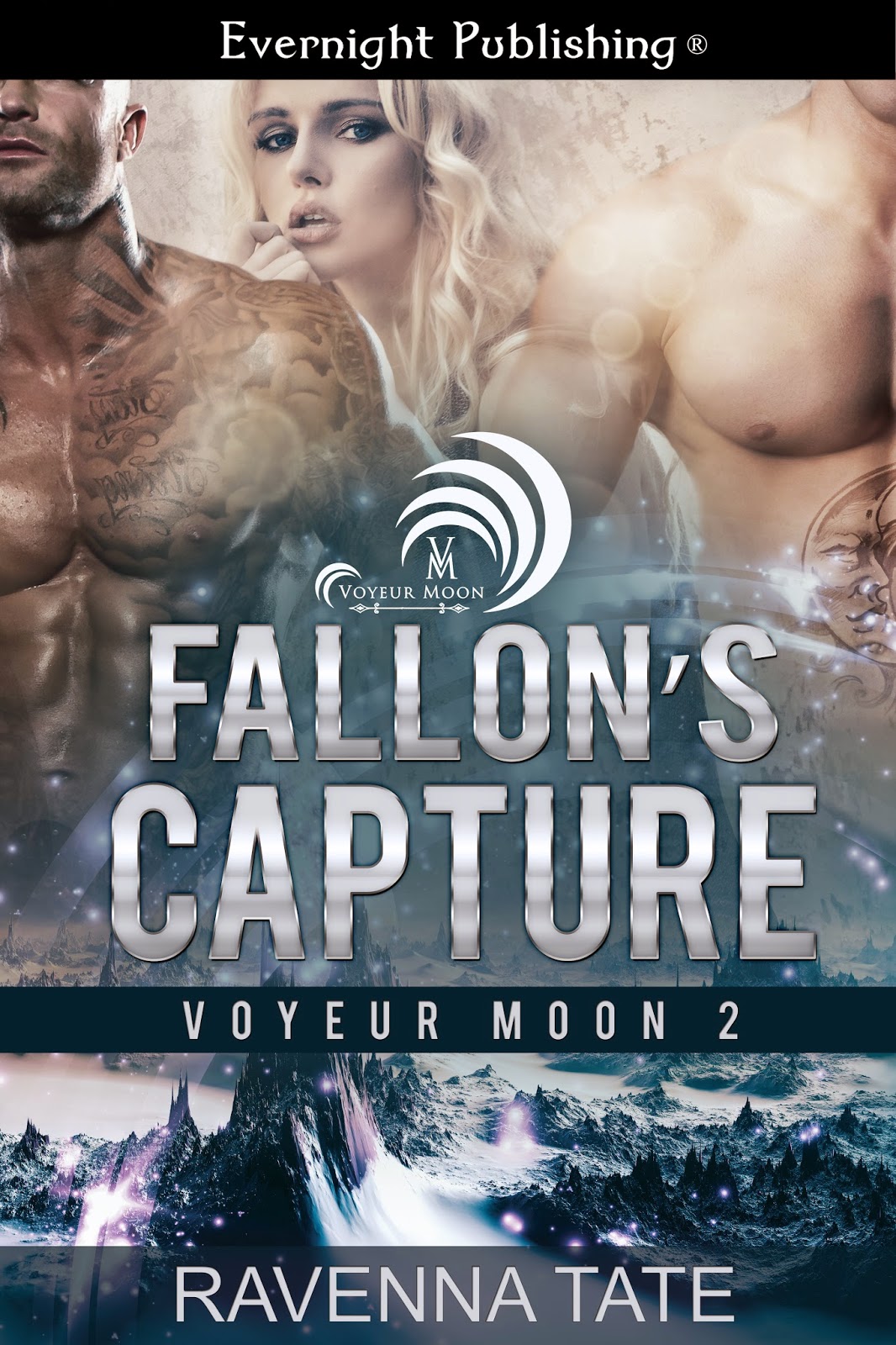 The last thing Fallon Myers remembers before waking up as a prisoner was walking home from her favorite bodega. Now, she’s being forced to participate in sex shows for the crowds on Voyeur Moon, along with two political prisoners.

Cord and Arlo have been fighting against the extreme faction of Tyranns who now control Voyeur Moon, and who built the infamous Zoo, for years. The charges against them are bogus, but their growing love for Fallon is real.

The three can’t see or hear the crowds who pay to watch them have rough sex, but the shows take an emotional toll on all of them.

When an opportunity to escape arises, the men face a difficult choice. If they leave Fallon behind, the Tyranns will simply place two new prisoners in her quarters. But if they take her along, all three could lose their lives.

She glanced from Cord to Arlo, and then before she lost her nerve, she pulled off her tank top. They stared at her boobs like they’d never seen any before, and Fallon had to bite back a laugh. “Okay. Your turn.”

Her pulse raced and her nipples tingled, forming taut points within seconds even though the room was warm. They guys gave each other a wary glance, and then Cord took off his T-shirt, revealing a hard, muscled torso decorated with tats. Each one bore numbers which she assumed were dates, but this wasn’t the time to ask what they symbolized.

Arlo took off his shirt next, and she couldn’t stop staring at his body either. They were each as beautiful as she’d imagined they would be. Arlo only had one tat, but it covered most of the left side of his torso, and she couldn’t identify the design. She’d ask later.

His gaze softened as he brushed a finger over her labia. “It’s all right. I like it.” Arlo glanced toward Cord, who stared at her like he wanted to devour her. “What do you think?”

“Think? What do I think? I think I want to lick every square inch of her skin, and then I want to fuck her until neither one of us can walk.”

Fallon sucked in a sharp breath as Cord removed his shorts. He covered her body with his, capturing her mouth in a kiss so hot she was sure the comforter would catch on fire. She’d only caught a quick glimpse of his cock, but now she felt its width and length against her pussy lips, and she arched upward to rub it.

He moaned deep in his throat as she parted her lips to let his tongue inside, and when his hands tangled themselves in her hair, she wrapped her arms and legs around his warm, hard body. The lust consuming her was swift and powerful. Was it due to everything that had happened to her in such a short time, or the result of not having had sex in over a year?

She had no clue, and she didn’t give a shit. She only knew she wanted this man right now more than she’d ever wanted anyone or anything.

When he released the kiss, he trailed his tongue across her neck. “You taste like heaven.”

She didn’t answer him. She couldn’t. Fallon could barely think right now. As Cord moved lower to circle each nipple with his tongue, Arlo cupped her face in one strong hand and kissed her. She shoved her tongue into his mouth, moaning loudly as he sucked hard on it. One of them grabbed her left breast, teasing the nipple, while the other breast was alternately licked and sucked.

It didn’t matter who was where. Both men were very skilled, and she was on fire for them. Shivers ran up and down her spine as the men took turns now, kissing her mouth and teasing her nipples with their teeth and tongues.

“You’re so beautiful,” whispered Arlo. “You excite me beyond all reason. I might still be going by the time we have to put on that silly show.”

She giggled at the thought of spending over twenty-four hours in this room with both men. They’d all be too tired to do anything except sleep for the crowd. Cord turned her onto her side, and then pulled her on top of him. She rubbed her soaking wet pussy against his dick as a climax inched closer with each stroke.

Cord grasped her breasts and squeezed them, groaning in such a sexy way that Fallon struggled to keep breathing. “I knew you’d be this fucking delicious.” His voice was rough now, as if he were barely hanging on.

Arlo moved behind her and tugged on her hair, forcing her head back. “So did I.” He planted tiny kisses and then bites up and down her neck. “Thank you for this, Fallon. We’ll make sure you enjoy it. That’s a promise.”

“I already do.” She moaned loudly as Arlo pushed her torso down over Cord, lifting her hips so that he could slide a finger into her pussy from behind. She arched her back, pushing her ass further in the air toward him, and then she moved her breasts closer to Cord’s face.

“Oh, baby. That’s right,” said Cord. “Bring those here.” He grabbed her breasts and nuzzled his face into them, while behind her Arlo slipped two fingers into her pussy and used the other hand to massage her clit.

“You’re so fucking wet,” he said, his voice rough and deep. “I’m going to fuck you silly.”