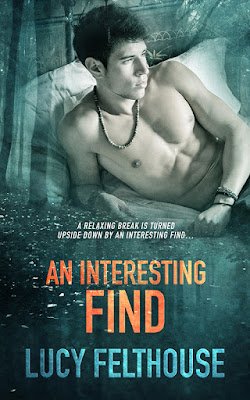 Blurb: Nathan and Lee are on a relaxing summer holiday in the UK. They plan to do lots of walking and exploring in the beautiful English countryside. Naturally, typical British weather derails their plans on their first day, leaving them cooped up indoors with little to do but read. When the weather clears, the men eagerly put on their hiking boots and head out for a walk. However, when they reach their destination—a pond a little distance from their holiday cottage—they make a shocking discovery. An odd-looking bundle of rags turns out to be an unconscious man. With no one else around, and no mobile phone signal to call for help, they manage to get the stranger back to their cottage to get him warm and dry, and figure out what to do next. When their unexpected house guest regains consciousness, however, things just get more complicated. The stranger—a British soldier called Jonny—doesn’t want the authorities to be notified of his presence. As the three men try to come to some agreement, the sexual tension in the air becomes apparent, and suddenly the last thing on any of their minds is leaving the cottage… 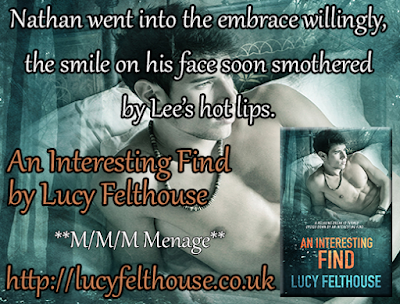 Excerpt:
Closing his book with a very final slap, Nathan then put it on the coffee table in front of him. He leaned back in his chair. Stretching languidly, he said, “Bloody good, that was. Though, admittedly, I thought it’d last me all week. Wasn’t expecting to get through it on day one.”
Raising an eyebrow, Lee shot Nathan an amused glance. “Not far off myself. Fucking storm. Stupid us, eh, going on holiday in the UK in summertime—not like you can guarantee the sodding weather, is it? Should’ve gone to the Canaries.”
“No, we can’t guarantee the weather, but…” Nathan gave the window a sidelong glance, “I do have some good news.”
“Yeah?”
“Yeah. The torrential downpour has stopped.”
“Seriously?” Lee slammed his own book closed and scurried over to the window. “Oh, wow, it’s cleared right up, and I can see a rainbow. Wanna head out? Just a little wander down to that pond we saw on the way here, maybe? Get some fresh air. We’ve got loads of daylight left, haven’t we?”
Nathan checked his watch. “Yeah, plenty. Especially if we’re only nipping to the pond. It’s probably only a fifteen-minute walk.”
“Fantastic. I was going a bit fucking stir crazy in here. I’ll grab our coats and shoes.”
Lee had disappeared into the hallway of their rented holiday cottage before Nathan had the chance to reply. Shaking his head with a smile, Nathan collected their empty mugs from the coffee table and took them into the kitchen, then got a bottle of water from the fridge. He doubted they’d need a drink during their short trek along the road, but he could just shove the bottle in his coat pocket and forget about it. At least it’d be there if they wanted it.
When he returned to the living room, Lee was just about to tie up his laces.
“I got water,” Nathan said, brandishing the bottle.
“Cool. Shoes are there.” He nodded to the chair Nathan had been sitting in. Sure enough, his trail shoes were waiting on the floor in front of it.
“Thanks.”
Within a few minutes, they were headed out of the door. Nathan locked up, pocketed the key, then checked the handle. He doubted very much the place would get broken into—they were in the middle of nowhere, after all. There were farms nearby, but the closest village was about a mile and a half away. So any thieves would have to make a considerable effort to get to the cottage in the first place, never mind attempt to break into it. Rolling his eyes at his own paranoia, he turned and followed Lee, who’d already started walking slowly along the road in the direction of the pond.
After falling into step beside Lee, Nathan pulled in some deep breaths, enjoying the fresh air after being cooped up in the cottage. It was a beautiful and cozy place, but it was supposed to be a base for them to go walking—somewhere for them to eat, sleep and shower, not to be stuck in for hours on end, staring at the walls. Or climbing them.
He admired the rainbow as they walked, its vivid colors painted across the watery sky. It seemed the clouds had literally exhausted themselves—only occasional wispy streaks of white now interrupted the never-ending blue. The sun beamed down, heating up the ground and beginning to evaporate the huge puddles. It would take some doing—one such puddle stretched across the width of the road, and they had to skirt around its edge to avoid getting wet feet.
Nathan smiled. Though the storm itself had been grim, the washed-out aftermath made everything feel fresh, clean somehow.
“You look thoughtful,” Lee said, breaking into his reverie. “A penny for them?”
“Mmm. It’s one of those things that sounds better in your head than said out loud.”
“Try me.”
Shrugging, Nathan replied. “Nothing major. Just admiring the rainbow, the sky, the clouds… Thinking how everything looks so fresh and clean after a good storm. Like it’s been purified, or something… Ugh, it’s stupid.”
Lee stopped and reached for Nathan’s hand. His green eyes were wide and filled with wonder. “No, it isn’t. Not at all—I was thinking something similar myself. It’s kinda romantic, isn’t it? Purification, rebirth, and all that.”
“In a roundabout way, maybe. I dunno.” He shrugged again.
Lee’s eyes narrowed, and his lips curved into a wicked grin. “We could make it romantic.”
“How so?”
“Come here, and I’ll show you.” Still gripping Nathan’s hand, Lee tugged him close and moved in for a kiss. Nathan went into the embrace willingly, the smile on his face soon smothered by Lee’s hot lips.