Today we’re presenting Author: Rose Wulf!
1) Have you always wanted to be an author? Yes, for as long as I can remember! And no, I will never show anyone those earlier stories… *shudders*
2) What genre(s) do you write? I’m pretty much all about romance right now, but the sub-genre changes up from time to time. Largely I prefer paranormal, though I do have one contemporary novella available. I’m also working an out-of-the-box sci-fi/paranormal romance, too!
3)  Have you ever self published? No I have not. From my understanding it’s too expensive!
4) Who or what inspired you to write your first book? Hmm… well, I was influenced in part by many sources. Firstly my mom, an avid reader, from whom I inherited my own love of reading. From there creating new stories for others to enjoy I guess just seemed like the natural step! If I were to pick an early on inspiration from an author, I would say the late Anne George. Her book Murder on a Girls’ Night Out was my first favorite book.
5) How many hours in a day might you write? On a good day I could spend pretty much all day at the computer! You know, with an occasional break to eat. Unfortunately I do have to go some days without writing entirely, and many days where I just don’t spend the entire day writing. But I do try to get an hour or two in a day whenever possible!
6) Are you a plotter or a pantser? Can I be both? I almost always start with a plot, but usually it’s a loose ‘what’s the goal?’ or ‘what’s the situation?’ and I always sort of stumble upon more plot lines, and plot details, as I go.
7) Do you ever find yourself slipping away and becoming so immersed in your  story it affects how you relate to others? Honestly, I’ve never really thought about that! Other than, of course, there have been times my writing affects how frequently I interact with the outside world. When a story demands to be written there’s no denying it!
8) Are you in any of your books? Only in pieces. I try very hard not to make any of my characters direct representations of me, but most of them have aspects of my personality. Or, in some cases, my ideal personality!
9) What do your friends and family have to say about you writing? My friends and close family are very supportive of my writing. It helps that my friends are all readers, too, of course! My mom buys multiple copies of all of my books and my friends read them, too. They’re always encouraging me to keep writing.
10) Please share an excerpt from your book that totally spoke to you when you put the words down on paper.
From: Found in Flames 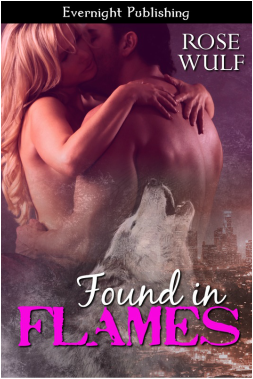 Excerpt:
The body over his shoulder tensed in split-second warning and Luka cringed even as another high-pitched shriek tore through the air. If my ears ever stop ringing I’ll be damn lucky. And judging from the expressions of the frozen, wide-eyed, wincing wolves around him, Luka imagined he wasn’t the only one who felt that way. But he knew damned well he was the only one who’d do anything about it, so he kicked aside a rock and deliberately dropped the woman on her ass.
Her scent rushed past his nose as she fell and he was reminded forcefully of the wave of desire he’d first felt when he’d tackled her full-figured, curvy body to the ground in that alley. For an illogical moment he’d wanted nothing more than to taste her. Fortunately, as before, he was quickly pulled back to his senses.
“Ow!” the woman exclaimed, her scream ending abruptly as she crashed onto the dirt. The jolt of the impact only threw her off for a moment, however, as she immediately scrambled to her feet and threw a pointer finger into his face. Or, rather, as ‘in his face’ as she could from her 5’8” height. It was kind of cute the way she had to crane her neck just to maintain eye contact when she got close. “Just who do you think you are, pal?” she said, jabbing his collar with her finger. “You can’t run around kidnapping people!”
He had a fleeting second to consider that, under vastly different circumstances, he might have been highly entertained by the scene she presented. But he was in no mood for humor or long, loud, unfounded lectures. Fortunately, their audience wasn’t afraid to make itself known, either.
Distinct throat-clearing from Chad seemed to break through her rage because her eyes widened and she cut a glance to the side. Luka watched as she quickly realized they weren’t alone, noting the rush of blood to her cheeks and the way her shoulders tightened as her scent changed from surprise to embarrassment to fear. She turned in a complete circle, taking in the gathering strangers, and when she was done she’d taken a partial step closer, as if she suddenly trusted him.
“Where are we?” she whispered out the side of her mouth.
“Safe,” Luka replied shortly. If he’d intended to say anything else, though, he supposed he ought to have known better.
The woman whose name he didn’t yet know spun back to him, her brown eyes wide again. “Safe? Are you serious? I’ve been kidnapped! How am I supposed to feel safe?”
“Maybe you shouldn’t,” Vanna offered bitingly as she and Morgan stepped down from a crevice of rocks, lightweight dresses hanging off their shoulders. They came to a stop several feet away, on the other side of Chad, and kept their glares on the human as if they were sending her psychic insults. Which, Luka figured, they undoubtedly would if they could.
But Luka really wasn’t in the mood for their crap, so he cut in with a glare at the wolf who should’ve known better. “Vanna.” He waited until she’d looked away, head bowed and silent, before returning his attention to the human woman. “You can leave whenever you want,” he said bluntly. “But out there,” he added, jerking his head over his shoulders to indicate the city lights she probably couldn’t see, “the witch can get you. And he will come.”
The woman’s mouth opened, her scent telling him she was fully prepared to argue with his statement, and he knew the exact moment her brain processed his words. A couple of heartbeats later her mouth snapped shut and she swallowed heavily.
“Al—” Chad began, cutting himself off and clearing his throat as he obviously thought better of his wording. “What about Justin?” he asked instead. “Do you want me to go find him?”
Schooling his expression into the closest thing he could manage to minor frustration, Luka replied, “No.”
“But—”
“No,” he repeated, lifting a stare to the younger wolf for emphasis.
“I’m sorry,” the woman finally mumbled as Chad’s head lowered in submission. “Did you say ‘witch?’

11) Which actor/character(s) would play the starring role? Here they are:

Thanks for stopping by today, Rose! Happy creating. J


Goodreads: http://goodreads.com/RoseWulf
Posted by Allyson Young at 12:00 AM