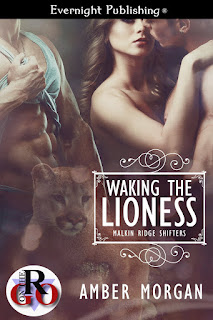 Blurb
Convinced she could never give her fiance what he truly wanted, cat-shifter Lara Carey walked away from her home and her engagement, and started fresh in New Orleans. One year on, she's never stopped missing Zane Walker...but it's too late to do anything about it, isn't it?

Zane Walker hasn't come to New Orleans to find Lara, but when chance throws them together, his passion for her is reignited. There's just one problem. Zane's new lover is missing somewhere in New Orleans, and even if Zane and Lara find him, can Lara accept him and Zane?

She smiled, hoping she didn’t look as nervous as she felt. “Is Tate the jealous type?” she asked, flexing her fingers. Zane let out a long sigh.
“Lara, this isn’t—”
She moved in front of him, sliding her hand down his torso until she cupped his balls. Another ragged sigh. Lara licked her lips and kissed his throat, nipping lightly. The smell of male arousal mingled with her own musk. She kept her eyes on Tate as she teased Zane, raking her nails over his balls and rubbing her thumb across that soft, sensitive stretch of flesh beneath, just the way he loved. If Tate was the jealous type, she could be making a major mistake here, one she’d never recover from.
But Tate didn’t look angry or jealous as the dull glaze faded from his eyes. He looked…curious.
Zane groaned as she encircled his hardening cock. He pulled her hard against him, crushing her breasts to him with just the right balance of pleasure-pain. She whimpered as he dug his fingers into her hips, silently urging her on.
She worked her hand slowly up and down his shaft, her other hand making lazy trails up and down his chest. It had been so long since she’d been with anyone. The slightest contact burned like wildfire, and this was Zane, the only man she’d ever loved. Breathless with desire, wound tight with need, it was impossible to pretend she did this only to force Tate into a shift. She was doing this all for her own selfish pleasure and she wasn’t going to stop. And if Zane’s reaction to her touch was anything to go by, he didn’t want her to.
On the bed, Tate raised his head and chirped at Zane. Zane raised his head, a little growl escaping his lips. “You know the rules. You want in, you shift,” he said in a voice thick and throaty with desire.
The words caught Lara off-guard. They implied so much with so little. So much history, past threesomes maybe. Her heart skipped. Did Zane think... Would she even...?
Her stomach filled with butterflies as she realized she would. Dammit, she was so starved for skin contact, so – yes, still so in love with Zane, that she would. She’d take both men. Excitement raced through her. She’d take them both and savor the thrill of it.
Tate shook his head and pushed himself up, his wounded back leg clearly hampering him. Lara’s hand faltered for a second, worried he’d hurt himself worse, but then Zane’s hand closed over hers. “Finish what you started,” he growled.

Blog
I'm a werewolf girl first and foremost, but my second-favourite shifter is definitely the werecat. Although the term “werecat” only really came about in the 1970s, there's been myths and legends about humans turning into cats forever. In European folklore there are stories of witches turning into domestic cats. In Africa, leopard gods and goddesses would take human form and mate with mortals, and their offspring would be shapeshifters (hmm, now there's a story idea...). In Asia, the ghosts of people killed by tigers could become evil beings called Chang, who made sure that tigers killed even more people!

And in America, where WAKING THE LIONESS is set, we have were-jaguars. In Mesoamerican cultures, priests and shamans would wear jaguar skins to become jaguars themselves. There are also stories of bipedal felines – kind of like Bigfoot, but, you know, cats. There doesn't seem to be much about shapeshifting mountain lions, but that's the beauty of being a writer – I can make it up! I'm hoping that WAKING THE LIONESS will be the first in a series of werecat stories, because there's just so much to explore! In the mean time, I'm looking forward to you meeting, Lara, Zane, and Tate, and getting to know my werecats very, very intimately.

Amber is the secret identity of a writer who normally pens urban fantasy, but feels like stretching her wings. Amber loves darker romance, anti-heroes, good red wine, and expensive chocolate (sometimes all at once). She's based in the UK and lives in an adorable cottage with her dream man and two stupid snakes. 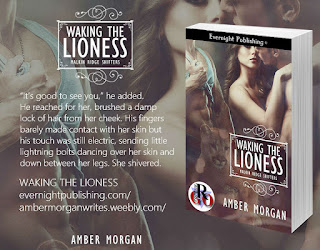