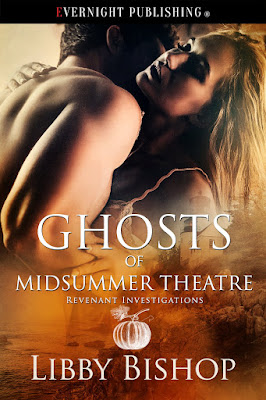 Blurb:
In 1956, the Midsummer Theatre—Noble, Maine’s most popular playhouse—closed after the daughter of the owners was murdered. Unfortunately, her killer was never found. The owners did not want the theatre opened again, but when the theatre passed into the hands of their grandson, he decided that it was time to renovate and reopen.
But the ghosts of the past don’t just fade away.
As a two year anniversary present, medium and paranormal investigator Arabella Pierce arranges for a private investigation for her and her love, Lucas Brown. Not only to help the owner get answers about his aunt’s murder, but to help keep interest in the theatre until it reopens. But as the investigation gets underway, Arabella and Lucas quickly learn that the darkness behind the murder still lingers, and if they don’t remove that darkness the theatre can never again open its doors.
They have forty-eight hours to solve the mystery of Midsummer Theatre, and every second will count. 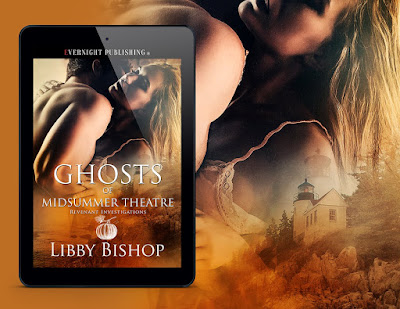 Excerpt:
Arabella Pierce—medium and paranormal investigator—nearly choked as she fought to keep the laughter at bay. That was made quite difficult by the shock and awe expression on her boyfriend’s face. With his mouth agape and his gaze slightly wide, not to mention his stillness, she half expected him to faint.
Her control finally broke when he slowly lowered himself onto the couch. “Lucas, are you all right?” she asked with a chuckle.
He blinked once. “Are you saying that you’ve arranged for us to investigate Midsummer Theatre? Just the two of us? On our second anniversary?”
Smiling, she sat down beside him. “Yes, that’s what I’m saying.”
The shock began to ease away and excitement began to creep in, but the awe was still in his gaze as he met hers. “How did you manage that, Arabella? I’ve been trying for two years!”
Leaning back against the couch and crossing her legs, she replied, “Folger helped me get a meeting with the owner down in Portland. Since he’s in the process of restoring it now, we convinced him that allowing you and me inside for two nights would be beneficial when it came time to reopen. Investigation starts tomorrow morning.”
About three weeks after Lucas had moved permanently to town, he began to hear about the local legends of hauntings. Noble, Maine had its fair share of ghosts, and for a skeptic reporter like Lucas, he was immediately interested in finding more information. He wasn’t skeptic about ghosts—they’d been known to exist for thousands of years, as had people with gifts to help with them. But he was skeptic of claims of hauntings, and especially of people who claimed to have a gift but didn’t have the testing to prove it. That had actually been how they’d met.
Two years ago, her boss, Folger Dade, had allowed Lucas to join the team on a case. Lucas was especially interested in her gift since mediums didn’t have a test that came with official State or Federal paperwork as empaths or conjurers had. Empaths could feel the emotions of the dead, while conjurers could call the dead to them. Lucas was skeptical that she actually had a gift, but he had behaved as a professional, and his article on the Revenant Investigations team had bolstered their cases.
The increase in cases had Folger seriously considering hiring on a few more gifted and non-gifted investigators.
The Kingston Cottage case was also when she’d begun to fall hard for Lucas. “Don’t push him into the bay,” had been Folger’s words to her the day he’d told her about Lucas. Two years later, she was happy she hadn’t done so on their first meeting.
“How did you tell him our investigation would help?”
“Folger wisely used the fact that the theatre was a Noble landmark, and that allowing us to investigate would only help get people interested in following the restoration,” she said. “The theatre was quite popular before it was closed.”
Lucas chuckled. “My article could draw more attention for a better opening?”
“Something like that, yes. And every Noble resident who knows the history of the place wants to know about the ghosts.”
Lucas grabbed her unexpectedly and pulled her onto his lap. He kissed her soundly, causing heat to curl in her belly.
“I couldn’t have asked for a better anniversary gift,” he said when he broke the kiss. “Well, I could, but this is a damn close second.”
Before she could ask what would be a better gift, he stood, with her still in his arms. She wrapped herself around him quickly and let out a laugh. “Where are we going?”
“To the bedroom to celebrate!”
BIO:
Libby Bishop is a paranormal romance/erotic author. She loves reading, writing, movies, Lindt dark chocolate, autumn, the paranormal, and spending time with friends and family. She has one fat, fluffy cat who thinks she’s queen of the house…and really, she is. 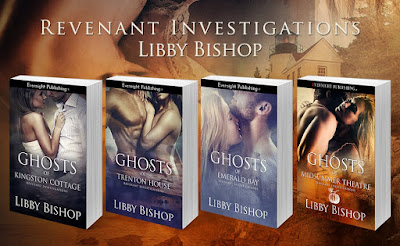