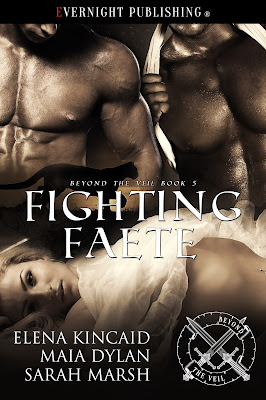 *AVAILABLE NOW*
Fighting Faete is book number 5 in our Beyond the Veil series, and these characters are three of our favorites. Kat's fierce independence combined with Alak and Aeron's protective natures adds up to an explosive romance that Maia, Elena and myself had so much fun writing. We hope you enjoy them as much as we did!


Darkness is coming to both sides of the Veil…
Katrina was born to fight. She earned her position as Beta through blood and battle and she’ll do anything to protect those she cares for, but being a hardened warrior comes with sacrifices. The aftermath of her kidnapping has her fighting harder than before, even with herself.
Aeron and Alak have always known their service to the Goddess Rysanna came with a heavy responsibility, one they easily accepted. Years later, with a battle for the ages looming, a beautiful golden cougar brings all of their seemingly forgotten instincts to the surface. Will their fiery mate fight their fate, or will she embrace the gift bestowed upon them?
As the trio struggle to find their path, dark emerging forces would see both the human and Fae realms fall into despair. Finding love can sometimes be the simple part … but for some, accepting it isn’t always easy.
Be Warned: menage sex (MFM), anal sex, double penetration
Purchase here!
Amazon: https://www.amzn.com/B079VWG92G
B&N: https://www.barnesandnoble.com/w/fighting-faete-elena-kincaid/1127960918
Evernight: http://www.evernightpublishing.com/fighting-faete-by-elena-kincaid-maia-dylan-and-sarah-marsh/ 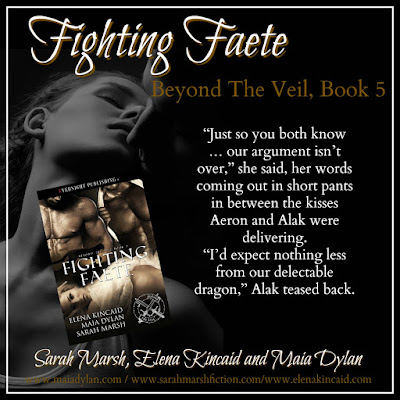 Excerpt:
With one pass of Aeron’s magic over her clothing, the seams melted away, and he gently dropped the scraps to the ground, leaving Alak’s arms full of warm, golden, naked skin. Alak placed a kiss along her shoulder, up to her neck, while Aeron did the same on the other side. Their mate’s arousal was all that was important right now, and Alak could think of nothing else but ensuring her pleasure.
“Just so you both know … our argument isn’t over,” she said, her words coming out in short pants in between kisses Aeron and Alak were delivering.
“I’d expect nothing less from our delectable dragon,” Alak teased back.
“Are you mocking me?”
Alak saw the tiny smirk at the corner of her mouth, and he pulled her chin towards his own lips before looking straight into her golden eyes. “Never,” he said, and then he kissed her with everything he had building up inside of him. His passion, his frustration, his longing, and finally, with all the loneliness he and his brother had endured over their long lifetime. To be High Dorum was the greatest honor the Goddess could bestow upon her children, but it set them apart from the rest of their people. They’d almost lost hope for a mate of their own, for how would one female hold the strength to equal theirs? But the Goddess sees all her children, and she must have known that this remarkable woman was just out there, waiting for Aeron and Alak to follow the path that led to her. Now it was up to them not to screw it up.
“Do you want us, Katrina?” Alak finally pulled back from her lips and whispered his question, as if afraid in this moment that she would deny them all what they so desperately needed.
“I do,” she replied without a single hint of hesitation in her voice.
Alak carried her to the master bedroom in their suite with Aeron following closely behind. When they reached the king-sized bed, Katrina lowered herself down the length of him and then positioned herself on her back in the center of the bed. A golden goddess, holding him in place as he gazed upon her in fascination. She stretched out her arms and beckoned them to join her. Finally, he snapped out of his daze, and he and Aeron continued undressing. He loved the little hitch in her breath as they revealed themselves to her, her gaze roaming over their bodies, seemingly greedy to take them in. Alak ached for her. He grabbed his length and slowly stroked, and the sight of her little pink tongue darting out to wet her perfect lips made him groan out her name.
“Katrina, are you wet for us, mate?”
“Yes, do you want to see?” she purred, legs falling gracefully to each side.
“You make my mouth water seeing you ready for us,” Aeron said, his voice strained with desire. “I’ve thought of this moment many times since we met.”
Alak knew all too well what his brother was feeling in this moment—the same kernel of hope was beginning to burn bright in his own heart, that this glorious woman would make their lives complete. He followed Aeron onto the bed and stretched out beside Katrina while Aeron knelt by her feet, his hand slowly stroking along her calf.
“I think it’s time we quenched our thirst, brother,” Aeron said.

Also available in the Beyond the Veil series! 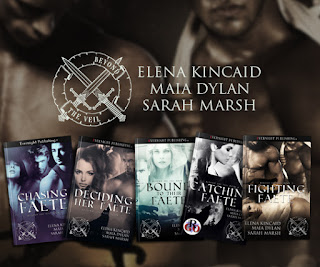 About Maia Dylan:
Maia Dylan lives, loves and works in beautiful New Zealand.  She married her best friend and they have two adorable, but stubborn children who obviously take after their father.
Maia’s career has featured a lot of travel, and she has filled her time at airports and in the air with books, books and more books.  Her love of erotic paranormal romance has seen her amass a huge library.  She has been an avid reader and lover of ménage romances since she read her first book in this genre about three years ago.
Outside of writing, Maia loves to eat, so she loves to cook!  Her herb garden is legendary, but she still has issues getting tomatoes to grow.  She’s been a performer for years, and has even sung on international stages, she would love to own a classic Ford Mustang one day and of course have the opportunity to race it on a race track without fear of a speeding ticket.
Although ultimately her dream is to be able to write full time on a sandy beach with a Mai Tai at hand, she is quite happy to fit her writing in when she can.  As long as someone reads her books, gets a laugh and maybe come to love her characters and much as she does, then she feels that she is living her dreams no matter what!
AUTHOR LINKS
Amazon Authors Page US: http://amazon.com/author/maiadylan
Facebook- https://www.facebook.com/maiadylanauthor
Street Team FB Page - https://www.facebook.com/groups/955387561187276/
Goodreads - https://www.goodreads.com/author/show/13724210.Maia_Dylan
Twitter - https://www.twitter.com/Maiadylanauthor
Website – http://www.maiadylan.com
Blog - http://www.maiadylan.com/#!blog/c112v
Newsletter sign up link:  http://www.maiadylan.com/#!contact/c1kcz
About Sarah Marsh:
Sarah Marsh was born in British Columbia where she still lives. She has only recently began her writing career, finding it the perfect outlet for taking the edge off a nine to five office job. She’s been a science fiction and romance junkie for years and when her imagination started to take the characters she’d read about even further in their adventures, she decided to try writing something of her own.
Sarah’s also a former pastry chef and spends a lot of time cooking and baking for friends and family as well as painting and knitting. Her biggest weaknesses are animals of any kind … she even loves the ones that wake you up at four in the morning because they can almost see the bottom of their food dish.
When it comes to life in general, she’s a big believer that laughter is the best medicine and that there’s no such thing as too much love, which is why she’s such a sucker for a happy ending.

Author links:
Bookstrand: http://www.bookstrand.com/sarah-marsh
Amazon: http://www.amazon.com/author/sarahmarshfiction
Blog: http://sarahmarshfiction.com/
Facebook page: https://www.facebook.com/sarahmarshfiction/
Twitter: https://twitter.com/SM_fiction
Facebook Street Team link: https://www.facebook.com/groups/955387561187276/
About Elena Kincaid:
Elena Kincaid is an award winning author. She writes Erotic Paranormal and Contemporary MFM and MF Romances. She developed a passion for reading and writing at an early age and loves to write what she loves to read and that is usually romance with a paranormal twist. Her desk is constantly cluttered with journals, sticky notes, and torn out pieces of paper full of ideas.
She was born in Ukraine and raised in New York, where she currently lives with her daughter. She graduated college with a BFA in creative writing and In addition to writing, she also started a graphic design business a few years after graduating. When not working, Elena loves to spend time with her family, travel the globe, curl up with a good book, and catch up on her soaps.