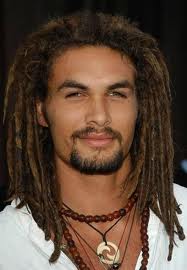 What do you really need to know about Jason Momoa except that's he' such a gorgeous slice of man, it almost hurts to look at him?


According to Wikipedia, which I shamelessly copied and pasted here: "Joseph Jason Namakaeha Momoa (born August 1, 1979) is an American actor and model. He is known for his role as Ronon Dex (2005–09) on the military science fiction television series Stargate: Atlantis (2004–09). (In this series, he had these fabulous dreadlocks you see here). In 2011, he became recognized for his role as Khal Drogo in the HBO medieval fantasy television series Game of Thrones and also starred as the title character in the sword and sorcery film Conan the Barbarian (2011).[3]"

He's rocking a totally exotic look, due to be born in Hawaii. In addition to having native Hawaiian blood, his mother was also German, Irish, and Native American ancestry, and if you put the best of these features of these totally different ethnicities, you get this SUPER HOT GOD.

Jason is, as I said, totally hot and unfortunately for us, so is his wife Lisa Bonet, formerly of The Cosby Show, and formerly Lenny Kravitz's wife. They have made super hot babies together, featuring ultra cool names like Nakoa-Wolf.

Poor Jason was attacked to his beloved face with a beer bottle, and needed 140 stitches, while his attacker was charged, in 2008. If you see him in more recent work, you can see some scars. Don't worry Jason, you're still a total hunk.﻿

I know you are all licking your computer screen, as am I, so I w﻿
Posted by Chloe Waits at 12:00 AM