This hot hunk just gets better with age. Anyone who remembers Pretty Woman will remember:

Richard Tiffany Gere born: August 31, 1949) is an American actor. He began acting in the 1970s, playing a supporting role in Looking for Mr. Goodbar, and a starring role in Days of Heaven. He came to prominence in 1980 for his role in the film American Gigolo which established him as a leading man and a sex symbol. He went on to star in several hit films, including An Officer and a Gentleman, Pretty Woman, Primal Fear, and Chicago for which he won a Golden Globe Award as Best Actor, as well as a Screen Actors Guild Award as part of the Best Cast. 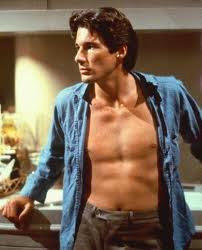 Gere was married to supermodel Cindy Crawford from 1991 to 1995. In 2002, he married model and actress Carey Lowell. They have a son, Homer James Jigme Gere, who was born in 2000 and is named after Gere's father, as well as the Tibetan name Jigme. 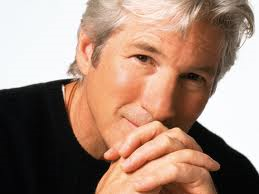 Gere is also a persistent advocate for human rights in and actively supports Survival International, an organization dedicated to protecting the rights and lands of tribal peoples throughout the world. Gere also campaigns for ecological causes and AIDS awareness.
Posted by Allyson Young at 12:00 AM