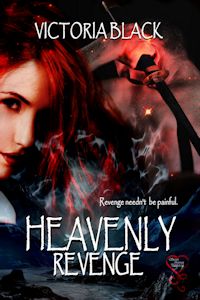 Here's some of Lisa's review:

And here comes the unusual. Our heroine is dead. Yep, you heard me. And I'm not giving away anything here because you figure that out in the first two pages of the book. But, she wasn't supposed to die yet. Heaven's not ready for her. So, she has two choices. Hang around Earth haunting people, including her cheating-ex, or go live life in an alternate universe and save the world. Um... hello? Bad-ass chick check... SAVE THE WORLD!
The hero? An arrogant king, who is at war with neighbors and believes her to be a spy. Can we say punishment :-)

I'm really on the fence about this one. The ending was spectacular. An assured happily ever after and what not. But the first meeting of this pair is rather rough and hard to take. The first sexual encounter happens early in the book, but it isn't under the best of terms. There was that moment that I almost put the book down because I thought it was too close to unwanted sex. (I'm so glad I didn't!) In fact the heroine keeps telling him to stop & he keeps persisting until finally she gives in and he has his way with her. Now, she enjoys every bit of it & even urges him to continue. The games continue throughout the rest of the book, and it is an enthralling read, but that first scene was rough. So, I've thought a lot about it and I have to say this is....

It's a "Four Cups of Love" read!
For the rest of Lisa Adams' review, go to Pen the Dream
You can purchase Heavenly Revenge from Secret Cravings, Amazon, Barnes & Noble, Bookstrand and ARe.
Posted by Unknown at 2:30 PM