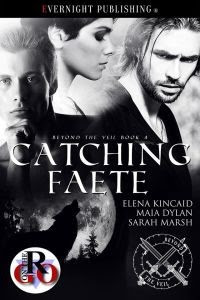 They say that when one door closes another shall open, but when Erica made her choice to stop a madman, she couldn’t have imagined the price that she would have to pay. The future she’d risked everything for had just changed forever.
The existence of the Dark Fae and their Goddess comes as a shock, but the fates had one more surprise in store for Erica and her mates in the form of orphaned twin babies who steal their hearts, but these children are not like the Fae Erica is familiar with. They come with powers that she and her husbands know nothing about. Dark Fae council will watch over them to decide if they are capable of raising the twins, making Ben, Erica and Leo feel the pressure of having their every move scrutinized.
When the twin’s dark powers begin to emerge, will one Fae Queen and two warrior shifters have what it takes to navigate the uncertain waters of parenting? …and will the Dark Fae council decide to let them try? 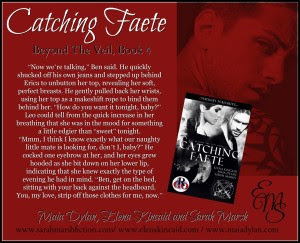 Excerpt:
Erica stopped in the doorway and turned to look back at her sleeping babies. The Goddesses truly did work in mysterious ways, she thought. She might not have had the pleasure of birthing the twins, but they were hers. She knew it with everything in her. They were hers!
“Come on, love,” Ben whispered in her ear as he urged her to lean back against him. “Leave them to dream of all the mischief and grief they will cause us over the next few decades. Now that they’re asleep, let’s make the most of this time we have alone.”
Heat swirled within her, and she nodded. They had been Mommy, Poppa, and Daddy all day. Now it was time for Mommy to get her some.
****
Leo had gone on ahead to the bedroom and lit all the candles they had, creating a golden glow that made Erica look radiant when she entered moments later with Ben. The smile on her face when she looked his way still made his heart skip a beat, just as it had the very first moment he’d seen her. He would swear that if he didn’t have a shifter’s strength, the sheer joy he’d felt since bringing the babies home and seeing Erica blossom as a mother would have made his heart explode.
He couldn’t have anticipated how two small little beings could instantly repair the gaping hole that had been ripped into their souls when the Goddess Allyria had told them the price they would pay for Alefric’s demise. But here they were, starting a new journey together, albeit, this one filled with much less danger, and much more need for an endless supply of wet wipes, but certainly just as important as anything Leo had ever done in his life previous. They would love and protect these children, and they would raise them to be the kind of people who made both sides of the Veil a better place.
“You look so resolved right now, Leo. What are you thinking about?” Erica stopped in front of him to gently caress his cheek with her hand.
“Just about how lucky we are … and how lucky you’re about to get.” He leaned in to kiss her as he landed a quick smack to her jean covered ass that made her yelp and laugh into his mouth.
“Now we’re talking,” Ben said. He quickly shucked off his own jeans and stepped up behind Erica to unbutton her top, revealing her soft, perfect breasts. He gently pulled back her wrists, using her top as a makeshift rope to bind them behind her. “How do you want it tonight, baby?”
Leo could tell from the quick increase in her breathing that she was in the mood for something a little edgier than “sweet” tonight.
“Mmm, I think I know exactly what our naughty little mate is looking for, don’t I, baby?” He cocked one eyebrow at her, and her eyes grew hooded as she bit down on her lower lip, indicating that she knew exactly the type of evening he had in mind. “Ben, get on the bed, sitting with your back against the headboard. You, my love, strip off those clothes for me, now.” 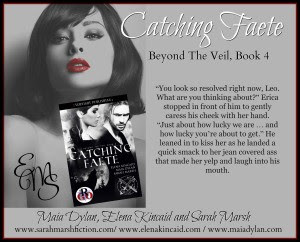 About Maia Dylan:
Maia Dylan lives, loves and works in beautiful New Zealand.  She married her best friend and they have two adorable, but stubborn children who obviously take after their father.
Maia’s career has featured a lot of travel, and she has filled her time at airports and in the air with books, books and more books.  Her love of erotic paranormal romance has seen her amass a huge library.  She has been an avid reader and lover of ménage romances since she read her first book in this genre about three years ago.
Outside of writing, Maia loves to eat, so she loves to cook!  Her herb garden is legendary, but she still has issues getting tomatoes to grow.  She’s been a performer for years, and has even sung on international stages, she would love to own a classic Ford Mustang one day and of course have the opportunity to race it on a race track without fear of a speeding ticket.
Although ultimately her dream is to be able to write full time on a sandy beach with a Mai Tai at hand, she is quite happy to fit her writing in when she can.  As long as someone reads her books, gets a laugh and maybe come to love her characters and much as she does, then she feels that she is living her dreams no matter what!
AUTHOR LINKS
Amazon Authors Page US: http://amazon.com/author/maiadylan
Facebook- https://www.facebook.com/maiadylanauthor
Street Team FB Page - https://www.facebook.com/groups/955387561187276/
Goodreads - https://www.goodreads.com/author/show/13724210.Maia_Dylan
Twitter - https://www.twitter.com/Maiadylanauthor
Website – http://www.maiadylan.com
Blog - http://www.maiadylan.com/#!blog/c112v
Newsletter sign up link:  http://www.maiadylan.com/#!contact/c1kcz

About Sarah Marsh:
Sarah Marsh was born in British Columbia where she still lives. She has only recently began her writing career, finding it the perfect outlet for taking the edge off a nine to five office job. She’s been a science fiction and romance junkie for years and when her imagination started to take the characters she’d read about even further in their adventures, she decided to try writing something of her own.
Sarah’s also a former pastry chef and spends a lot of time cooking and baking for friends and family as well as painting and knitting. Her biggest weaknesses are animals of any kind … she even loves the ones that wake you up at four in the morning because they can almost see the bottom of their food dish.
When it comes to life in general, she’s a big believer that laughter is the best medicine and that there’s no such thing as too much love, which is why she’s such a sucker for a happy ending.

About Elena Kincaid:
Elena Kincaid is an award winning author. She writes Erotic Paranormal and Contemporary MFM and MF Romances. She developed a passion for reading and writing at an early age and loves to write what she loves to read and that is usually romance with a paranormal twist. Her desk is constantly cluttered with journals, sticky notes, and torn out pieces of paper full of ideas.
She was born in Ukraine and raised in New York, where she currently lives with her daughter. She graduated college with a BFA in creative writing and In addition to writing, she also started a graphic design business a few years after graduating. When not working, Elena loves to spend time with her family, travel the globe, curl up with a good book, and catch up on her soaps. 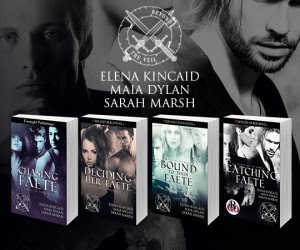