Today we’re presenting Author: Olivia R. Burton
1) Have you always wanted to be an author?
Most of my life, yes! I started writing young (bad fanfic, of course) and got addicted. It’s such a great escape.
2) What genre(s) do you write?
I write Urban Fantasy, though Rattle is in the sub-genre Paranormal Romance. I’ve dabbled in Fantasy, but I mostly stick to UF.
3)  Have you ever self published?
No, I haven’t wanted to brave it. I think it would cost money that I don’t have right now to really make sure the book gets great editing and a beautiful cover.
4) Who or what inspired you to write your first book?
Well, I was still in middle school so my first non-TV-fic story was basically a rip-off of Christopher Pike’s The Last Vampire. Once I got that out of my system, I started working on original work and finished a fantasy story based around the signs of the Zodiac. I mean to finish rewriting it, but it’s become a monster of a book so I’ve been putting it off.
5) How many hours in a day might you write?
When I was writing a lot I would usually write like it was a full-time job. I’d generally write about six or eight hours a day. It’s been awhile since I’ve been that productive, though.
6) Are you a plotter or a pantser?
I’m sort of in between. I generally have a whole idea of the book before I start, but I don’t outline or plot every chapter. Too, there have been several books that ended up not being what I came up with at all, but I think they are the better for it.
7) Do you ever find yourself slipping away and becoming so immersed in your story it affects how you relate to others?
Not usually. When I’m at the computer writing, that’s all I’m doing. I completely lose myself in the book and live in that world. Outside of that time, though, I’m the same person whether in the middle of a story or not.
8) Are you in any of your books?
Sort of! The fantasy story I wrote in high school started out as an adventure I wrote starring all of my friends, including me. I took the most noticeable and interesting traits of each of my friends—for good or for bad!—and created characters around those. The character I based loosely on me had my name, but I wouldn’t say she’s me anymore. I’ve since changed her name to reflect that. And because it’s probably tacky to name a character after yourself.
9) What do your friends and family have to say about you writing?
They’ve always been very supportive, even reading some of my really bad writing back when I was younger. They’ve promoted me to friends and extended family when I’ve had books come out. My ex-husband was always really understanding whenever I was in that “The book’s almost finished!” groove and I needed to hole up and write for a few hours after getting home from work.
10) Please share an excerpt from your book that totally spoke to you when you put the words down on paper.
From: Rattle

I really love every scene with Finn being an incompetent doofus, but as for touching scenes, I’m quite fond of the first time Veruca shows Finn her powers and shares a bit of her magic with him.
----
“This beats movie night,” Finn mumbled as he lay splayed out on Veruca’s bed. She laughed, turning to kiss his chest, before propping her chin up to catch his eye. He shifted as much as he could manage, returning her admiring smile.
“You’re sure you don’t want me to have a horror movie sent up?” she asked, walking her hand along the bed as if she’d go for the phone on the nightstand. “Something really bloody and wretched? With exploding eyeballs and—”
Determined to stop her from making him picture anything worse, he gripped her hips, sliding her up his body to force her mouth close enough to catch. She giggled into the kiss, running her fingers through his hair.
“I’ll take that as a no,” she said when he let her lips free. Opening his eyes, he met hers, content to just watch her for a spell. They stayed close, sweaty and satisfied, watching each other in silence until she took a deep, contented breath and pushed upward. She regarded him for a few moments before tipping her head.
“You couldn’t control that zombie.”
“Ah.” He shifted uncomfortably, resting his hands on her upper thighs. “I can’t always, no. Sometimes they get away from me.”
“Beatrice didn’t?”
“No, she was easy. She was older, her—Well.” He dropped his eyes, unfocused for a bit. “I didn’t have trouble with her.”
“It’s curious you couldn’t control Clay,” she said thoughtfully as she sat up. “You have the power to control so much more than one old lady, Finn.”
He mulled that over for a moment. “Five old ladies?”
“An army,” Veruca said, her lips quirking. He squinted, sure she was putting him on.
“Of old ladies?”
She laughed, the motion doing wonderful things to her bare breasts. Finn wondered briefly if he was ready to go again, or if she was at least. He wouldn’t mind just pleasing her, not just as thanks for all she’d done but just because he wanted to get lost in the sounds of her breathy moans.
“You should see what I see when I look at you,” she said, leaning forward just enough to press both hands against his chest, right over his heart. He looked up into her dark eyes, his brows lifting.
“I know what I look like,” he assured her, grinning as if in on the joke of his own arrogance. “It’s spectacular.”
“Not just your pretty face, darling,” she said, shaking her head. “Your soul. In fact ...” She went quiet, biting her lip as if considering something daring. After a few moments, she gave a nod, taking his hand off her thigh and lifting it to mirror her position. He fought the urge to slide his hand just a little further left to cup her breast.
“Take a breath,” she murmured, “and remember that you trust me.”
“I do?” he asked, hoping she could tell he was joking. She was already concentrating on something else, her expression gone a touch serious, her gaze on his chest. They were both quiet for a bit, Veruca’s hands warm on his skin, her lips slightly parted as she worked at something Finn hadn’t figured out. When he felt a jolt in his chest, a tug at his heart he was sure he recognized, he frowned. “What—”
A glow started at Veruca’s heart, a slow hum that seemed to have a pulse like listening to the heartbeat of a sleeping lover. He blinked, shook his head at first, sure he was imagining the sensations, but when Veruca smiled, her eyes roaming to his, he realized this was what she’d wanted him to trust.
“You see it?” she asked, turning her attention to the wide windows looking out over the city. “You see them?”
“I ...” Finn trailed off, realizing her pulse wasn’t the only one. There were a myriad of glowing heartbeats all around, most of them small and fast. They moved outside the hotel, hopping along the ledge, little golden orbs inside the dark shapes of birds. He turned his gaze back to Veruca’s face, but found it pulled to her chest once again, fascinated by the thin line of glowing light that trailed from her in a loose line to his heart, to a glow of his own.
It was bright, thick, like a knit case holding his heart safe in his chest. It looked similar to hers, but brighter, weaved tighter where the line from her heart touched it, but frayed in certain spots.
“What’s—”
“That’s your soul,” Veruca said, lifting her hand to run her finger down the line between them. Finn jolted when he felt the motion as a tiny vibration in his chest. “And mine. This is your power, how you control the dead.”
----
Find Rattle it at Amazon | Evernight | Goodreads

11) Which actor/character(s) would play the starring role? (you can attach pics or just insert names or both- pics can compete with the cover, but also pull in a lot of attention. Sometimes a pinterest link works well too, up to you)
Casting! I haven’t thought of casting for my books in years, actually. For Veruca, it’s difficult because she was born in Venezuela and being here in America, I haven’t been exposed to many Latin actresses. I could see Diane Guerrero in her role, I think. She’s on Orange is the New Black (or was the last time I was keeping up with it), and she’s beautiful and seems very confident. 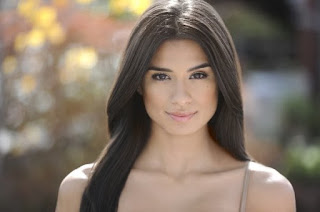 Finn was partly inspired by Colin O’Donoghue, both because he’s dreamy and because I came up with the idea for Rattle shortly after visiting Ireland. I was (and still am) in total and complete love with the country and its people. It was the most beautiful place I’ve ever visited and I didn’t meet a single rude person the entire time I was there. O’Donoghue popped up on Once Upon A Time with his sexy smirk and baby blues and I went, “Well, I need someone that hot in my books.” Finn’s not as competent or smooth as Hook, though, that’s for sure.
(Finn seen here trying to remember how to read) 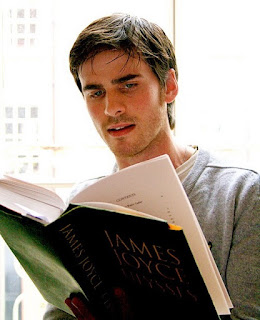