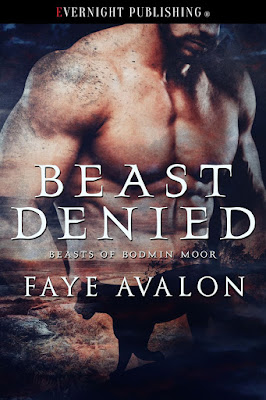 Bodmin Moor in Cornwall, England is an eerily enigmatic place, especially as dusk falls. For many years there have been rumors of a wild panther-like creature roaming the moor. Despite many sightings, only a few grainy images have been caught on film. An official investigation found no real evidence to confirm such a beast exists, but no evidence either that it didn’t. My imagination went into overdrive and Beasts of Bodmin Moor was born, featuring a covert pack of panther shape-shifters living amongst the unsuspecting Bodmin community.

Beast Denied, the second book in the Beasts of Bodmin Moor series has now been re-released by Evernight Publishing.

Embracing the future, means confronting the past.

Naomi Flynn doesn’t intend to mate or marry. Never again will she leave herself open to the manipulation she once endured. Besides, no panther male will want her anyway once they know the truth behind what happened a decade ago.
She’s happy to burn up the sheets in a buddy-with-benefits arrangement, until a hankering for a three-way sexual adventure thrusts her right back into the arms of the man she can’t afford to remember.
Tynan Galloway doesn’t intend to watch the woman he wants throw herself at every male around, except him. A brutal assault might have robbed him of his destiny as a protector of the pack, but damned if Naomi is going to be another casualty of his fate.
When he discovers she’s in potential danger, he challenges her to deny that he’s the one man who can protect her…unaware that Naomi is determined to prove him wrong.
This is a previously published work. It has been revised and edited for Evernight Publishing.

From the safety of the hotel bathroom, Naomi Flynn could hear the two men talking, discussing who would have the pleasure of fucking her first.
Leaning back against the locked door, her blood running cold in her veins, Naomi wondered what the hell she had gotten herself into. They’d seemed like regular enough guys, at least while she’d been sharing a drink with them. They’d flirted, flattered, and teased her. So much so that they’d appeared perfect for what she had in mind.
Until they’d locked the door to the hotel room, and with the gleam in their eyes came her first flicker of unease.
A couple of hours ago, Naomi had strolled into the hotel’s bar, intent on having herself one doozy of a party. She’d thought about it long and hard. Wasn’t having sex with two men every woman’s fantasy?
It had worked for her friend. Talia McLeod might now be all loved up with her new husband, their pack’s leader, but before she and Caleb became a couple, they had a triple deal going with Joshua, Caleb’s half brother, now working overseas.
Unlike Talia, Naomi had no intention of finding her true mate in this deal, but she admitted to being more than a little curious about indulging in a ménage à trois and hadn’t been able to shake the desire to try it for herself.
Living vicariously through her new friend had given Naomi a taste for adventure, and had fed her growing hunger to push through her comfort zone and see how it felt to live without constraint. Even if just for one night. The more she’d thought about it, the more she’d wanted it.
Of course, she’d chosen human men to assuage her curiosity. They would keep the whole thing from becoming too intense, too personal. With humans, there would be no complications. No possessive pack males insisting she become their mate or wanting to mark her as theirs.
Because that would never happen. It couldn’t. Not for her.
So indulging her fantasy with the aid of human men had been her only real option. But now, standing in the bathroom of a Truro hotel as the clock struck midnight, it seemed like her only option had gone belly up.
In fact, listening to the men planning what they would do to her when she hightailed it back to the bedroom had the opposite effect from making her hot and adventurous. It made her question her sanity.
With a hard swallow, Naomi hurried over to the window. She peered out and down. Two floors up, with a drop down onto concrete. Shit.
Had things been different, she would have shifted. In her panther state, she could make short work of those two floors and leap to safety before the men even realized she was gone. But that would never happen either. Not again. Over the years, she’d barely mourned her lost ability, and it had seemed the least of her troubles. Tonight, she longed for it.
Running a hand over her stomach, she pushed back the maudlin thoughts that nudged for attention. She needed all her wits about her to deal with her current predicament.
Perhaps she could simply go out there and tell them she had made a huge mistake, that she really wasn’t ready for this and had changed her mind. She’d apologize for leading them on, for getting them all worked up. Well, to be honest she’d gotten herself all worked up. This was what she’d wanted, what she’d planned for.
She stepped back to the mirror, smoothed down her hair. Nerves, she decided. She was simply suffering from nerves. She had never done anything like this before, which made it perfectly natural to have last-minute doubts.
“Hey, babe.”
At the thump on the door, Naomi dropped the sandals hooked over her index finger.
“You planning on joining us anytime soon?”
Naomi turned to face the door. “Just a minute.”
With trembling hands, she reached around and unzipped the short black dress she’d bought only yesterday. She let it slip down her body and pool at her feet. Turning, she glanced at herself in the mirror and saw skimpy black bra and panties, designed to send a man, or in her case, men, wild.
She stepped aside, picked up the dress, and threw it over the bathroom stool. Inhaling a long slow breath, she opened the door.

About the Author:
Faye Avalon enjoys writing sexy stories about strong men and the savvy women who rock their world. She has taken a roundabout journey toward her writing career, working as cabin crew, detouring into property development, public relations and education, before finally finding her passion: writing spicy romantic fiction. Faye lives with her super-ace husband and one beloved, ridiculously spoiled dog.