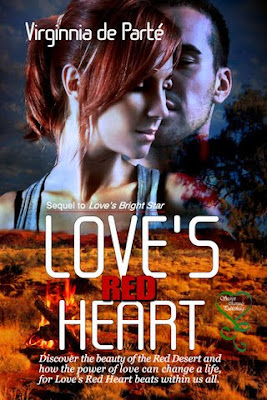 Adult excerpt
They stood at the second story window and looked over the night lights of . Michael took her in his embrace, pulling her around to face him, one arm around her waist, his hand resting in the small of her back. He ran the fingers of his other hand through her hair, brushing the long red threads from her face and moving to grasp the ends of her green silk scarf.
“May I? Can I take your hair down?” She nodded and he untangled the knot to drop the scarf to the floor before running his fingers through the topknot releasing her hair from the pins that had held it loosely in place. He cupped her chin in his palm turning her face to his, covering her lips with his. A kiss so deep and long, so overpowering in its sweet taste, it melded her body into his and their breath flowed and exchanged, their love released at last.
Michael lifted his lips from hers and murmured in her ear, “We’re wasting time.”
“I’m shy Michael. It’s so long…I’m scared I’ll disappoint you.”
“And you think I do this on a regular basis and I’m in a position to judge and make comparisons?”
“Well…”
“I’m as nervous as you are. Being a doctor doesn’t mean I don’t have self doubts like everyone else.”
She buried her head against his chest, a sudden onrush of anticipation causing her legs to tremble.
“Let’s just start slowly and follow where it leads us,” Michael said.
She allowed him to lead her to the edge of the bed, and stood frozen, her nervous tension making her body rigid. Her heartbeat pounded in her ears as he turned off the lights and folded back the bedspread before wrapping her in his embrace once more. She shivered from either nerves or the evening chill, she didn’t know which.
“Cold? I’ll soon warm you up” and with a deep intake of breath Michael removed her pashmina shawl, slipped the straps of her sun frock off her shoulders and turned her around so he could unzip the back of her dress. He eased her frock down to the floor and in response to his gentle pressure behind each knee she lifted her feet to step out of it and kick her sandals off at the same time. Now she stood barefoot in her bra and panties and his warm hands lingered to stroke her hips before turning her around to face him. He took her hands in his and placed her palms on the front of his shirt, against the buttons.
“Your turn.”
Oh, they were taking turns? Now she had a plan to follow her shaking eased. She unbuttoned his shirt, easing it off his shoulders and taking each arm out of its sleeve tossed the shirt aside. Relaxing into the rhythm she knelt to untie his shoes, to slip his feet out and slowly peel his socks off his feet. The idea that removing socks could be so sensual had never occurred to her before. They too went the way of the shirt, thrown in the general direction of a chair in the corner.
“My turn.” Michael’s husky tones sent a shiver of anticipation up her legs to end deep inside her. He reached behind her, his hands gentle on her skin and unclipped her bra to slip the straps off her shoulders arm after arm, releasing her breasts from captivity to freedom. Pouting proudly, her nipples stood so stiff they ached, their dull pain matching the beat of her heart.
Bending his head his tongue flicked and circled each nipple taking turns to tease them. Muscles deep in her pelvis tightened and dragged and between her thighs dampness tingled. He slid his hands down her back to slip under the gathered band of silk and lace. Twin travellers they caressed her skin taking the fabric down as they moved lower over her buttocks until his fingers grasped her cheeks, moving ever closer to her heat.
Desire rose like a flood and she pressed his head against her breasts with one hand while her other hand pushed her silk panties down her thighs and legs to quickly step out of them. She cupped his chin in her palms, running her fingers up his jaw line into his thick brown curls, urging him to meet her lips with his. Her hunger rose to another level as his tongue explored her mouth. His scent excited her. Not the smell of aftershave or cologne, but Michael, all hers.
A long breathe, and she slid her hands down his chest following the silky trail of curls to his waistband. Still locked in their kiss she blindly felt for and found the top catch and then the zip, sliding it down, pushing the cloth away. It hindered her. He shrugged out of his trousers and her hands searched and found the evidence of his lust erect and hard, straining to be free of its prison. Now it was her turn.
She searched, fingertips leading her palms, pushing fabric away and down until she could free his pulsing rod and cup his warm tight sacs. She broke their kiss, and wrapped her other hand around his penis, curling her fingers and walking them up and down its length like playing a piano, her tongue circling his erect nipple. Michael moaned a low note and began to tremble, his desire tensing, his body hard against hers.
Her nervousness vanished, drowned by desire, and she spread her legs ready to receive him as his knees buckled pulling his shaft from her grip and leaving her hands resting on his shoulders, where she stroked her fingers over his neck and the top of his back.