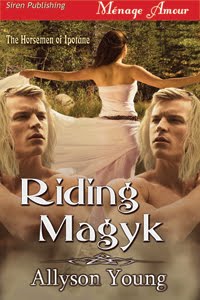 Jolene Etain Phillips is a witch, unaware of her power until she meets Xander Ahearn of Ipotane, a shape-shifting satyr who has crossed the barrier between his world and hers. Xander is on a mission to protect his realm from human interference. He has no time for a witch, but Fate has different ideas.
Xander can’t resist Jolene, and their union unleashes her magyk. He then rejects her, but his twin Sulieman will not. The twins share their females, and Sulie believes Jolene is destined to be their mate—they must marry her or be destroyed by her magyk.
Xander’s xenophobia drives both his brother and Jolene away, but he is nothing without her, lost without Sulieman. He and Sulie set out to find her and win her love, but another from their realm has found her first…

“Xander?” The fabric of Xander’s T-shirt further muffled Jolene’s whisper. He’d replaced the torn and bloody one with a fresh shirt, and she could smell him under the cloth, a nice masculine scent of sweat from the exertions of the night, and a hint of saddle soap. It was the same smell that drew her earlier, despite the fact he had been flat on his back in a dirty parking lot, beaten and bruised. Again it comforted her, reminding her of the cabin in the woods and all the animals Uncle Marshall cared for, letting her help where she could. She didn’t want to lift her face from Xander’s shoulder. Didn’t want to look up and see his handsome visage and be reminded of something she could no longer deny.
“I’m here, little witch. Can you sit up?”
Jolene pushed herself away from the security of Xander’s hold and squirmed to sit on his knee, looking at him cautiously. He winced and shifted beneath her, and she felt the ridge of his erection against her bottom. Her traitorous body instantly responded, and she cursed inwardly. He said he couldn’t resist her magic, but his personal appeal superseded anything she felt before, and she didn’t do one-night stands. She hardly did relationships. Jolene managed not to rub herself against him again as she slipped from his lap to make her way to the chair set against the far wall of the bedroom. She perched on the edge and stared at him. He was gorgeous. His large, dark-brown eyes were set widely beneath a noble forehead and his aquiline nose was perfect above chiselled lips. Those cheekbones were as prominent as she remembered. He looked sculpted, from his fine features to his lithe, smoothly muscled body. She carefully narrowed her eyes and saw him in his true form. He was indeed half-man, half-horse. The vertigo returned, and Jolene grabbed the arms of the chair to ground herself, taking deep breaths. She stole another cautious peek. Xander again looked human and good enough to eat. Jolene fought hysterical laughter. She was having a sexual reaction to a unicorn or centaur or whatever he was. Which made her what? Oh, of course, she was a witch! Or over the moon crazy.

Allyson Young
Posted by Chloe Waits at 12:00 AM