EXCERPT FROM MEMOIRS OF LADY MONTROSE

This story will be available on Total-e-Bound's site and can be ordered now for pre-release on 1st July; and general release on 29th July. Here's something to tempt you and make your Wednesday more enjoyable.
****
The hall clock chimed ten o’clock.  Time for the game to begin.
Mortlock’s footsteps thumped and his murmurings grew to sound very cross as he hunted without success.  Today he’d searched the library and in his hurry he’d missed her. He’d come so close the drapes had swayed. She’d suppressed a shiver and her nipples had hardened, brushed by the velvet.  Now his heavy tread moved upstairs as he looked before he pounded down the staircase. The door of the billiard room thudded as it hit the wall.  Moments later the library door opened, its familiar creak giving away his progress into the carpeted room.

He began his second search of the room beginning on the opposite wall. She heard him opening the cupboards, shifting the couch away from the window wall, swishing the curtains. Her skin tingled, her sex heated and her muscles tightened low in her belly. The thrill of knowing he would find her at any moment made her legs weaken and with a swish the curtain yanked back.  She stood revealed,  shivering in the draught,  her buttocks tense, her feet barely holding her on the low stool.
Her erect nipples ached, her flesh tingled with goose bumps and a giggle of delight escaped her as he stared, his gaze raking her from top to toe.
“At last.”
She stretched her arms up high to relieve their tension from being still for long minutes. Excitement bubbled and fizzed within her. He wrapped one arm around her waist and pulled her against his bare chest. His exertions had given him a sheen of perspiration. She toppled as the stool tipped. He righted her while he sucked and nipped her breasts. Hiding for so long had wound her like a coiled spring. She yelped in surprise . He released her and as the stool tipped once more he wrapped his arms around her waist to hold her steady.
“Minx.” He picked her up and threw her over his shoulder so her breasts rested on his back and her
arse received a swift spank....... 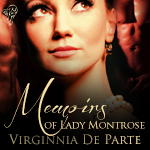