Something Supernatural for Hump Wednesday! 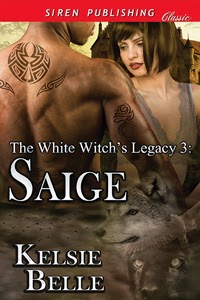 
Haunted by the curse of a tormented past, Damien Thorn doesn't believe love and a happily-ever-after is in the cards for him. A witch hunter and slayer who despises everything that has to do with witchcraft, he finds himself in a very uncomfortable situation when he has to help his adopted brother find his mate's sister, who happens to be a witch. Soon, just a sniff of Saige Callahan's peculiar scent has him panting after her and wanting things he vowed he would never want from any witch. Never did he expect to be drawn to her the way he is and he's determined to stay away from her, even if it killed him.

One look at Thorn's luscious physique has Saige convinced that she has to have him, even if it's just for one night. But how can she even get close to him if he's determined to hate her at all costs? Can she cast a spell on this jaded shifter to make him see that all witches weren't created equal?

Buy Link: http://www.bookstrand.com/the-white-witchs-legacy-3-saige
Posted by Allyson Young at 12:00 AM