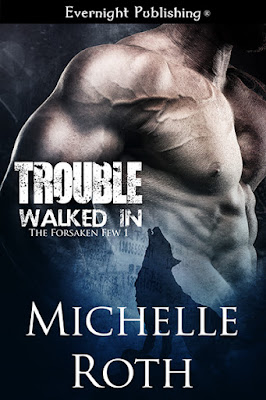 Hi there, everyone! I'm Michelle Roth and I'm here to introduce my latest release, Trouble Walked In [The Forsaken Few 1]. This story started as a submission for the Bad Alpha Anthology but quickly grew out of control with regards to word count. There was no way I was going to be able to tell the story I wanted to in a measly 10,000 words!

Once that was clear, I decided the book was more important than the anthology. It became MUCH easier from then on! Rather than just a wolf shifter story, I decided that I would make this about something larger. Lorelei, Florida was born.

Each forsaken by their own kind, a small community of shifters from all walks of life have come together to form an unbreakable bond that defies the laws of nature. Both the hunters and the hunted stand side by side to protect themselves from all who would threaten their way of life.

This is Ronan and Moira's story...

The moment Moira Devereaux walks into his bar, Shapeshifter Ronan Kelly knows she's going to be trouble. No matter how tempting she is, he won't risk the safety of his makeshift pack. He has every intention of sending her on her way until he hears her compelling story.

When Moira's father, the mayor of Lorelei, tries to force her to wed a man she doesn't know, she runs to one place he won't follow. The local shifter bar. Nothing could have prepared her for the immediate attraction she feels for the owner, Ronan.

In a moment of weakness, Ronan offers her a job and a place to stay despite his misgivings. No one is more shocked than he is when he discovers that she's his mate. Will he be able to convince her that he's worth taking a risk on or will he be forced to let her go?

An Interview with Ronan-

1.  If you had a free day with no responsibilities and your only mission was to enjoy yourself, what would you do?

I don't get a whole lot of free time, but when I do, I love to drive out to the national forest and go for a run. When you get deep enough into it, there's a section where humans don't travel. There's something about having my paws in the dirt that makes me feel connected to the universe. Nothing like it.
2.  What impression do you make on people when they first meet you? How about after they’ve known you for a while?

Well now, I think that depends on the person. I'm a big guy, so I think I probably give off a heavy 'don't fuck with me' vibe. Once someone knows me for a while, I think they realize that for my friends, I'm as loyal as they come.
3.  What’s your idea of a good marriage? Do you think that’ll happen in your life?

I'll let you know if I ever see one. (snorts)  My father treated my mom like an indentured servant. Raised his hands to her on occasion. I can tell you for sure what DOESN'T make a good marriage. Having your alpha mate fucking terrified of you. I- I don't want to talk about this anymore. Can we move on to something less depressing?
4.  What are you most proud of about your life?

I've been on my own since I was 18. Managed to not get myself killed in Iraq and Afghanistan during the war. Came home and worked my ass off until I had enough money to buy the bar. I made something of myself.
- And what about something more personal?

I'd say that's pretty personal.
- Why is that so meaningful to you?

When I left home at 18, my old man was just waiting for me to come crawling back to the ready-made life I had waiting for me. I think I shocked them all by making something of myself. Anything that can make that bastard choke on his words is meaningful to me.
5.  What are you most ashamed of in your life?

Shit. You're really into me talking about my feelings, aren't you? I'd have to say that leaving my mother behind. She was the only one in my family that showed the least bit of kindness to me. I send cards at Christmas but I have yet to hear back. I doubt I ever will.
6.  If you could spend the day with someone you admire (living or dead or imaginary), who would you pick?

My mother. That woman could give a hug. I don't know if she'd be inclined to at this point but it'd be worth finding out, I suppose.

7.  Do you think you’ve turned out the way your parents expected?

Of course I believe in the Earth Mother. It's hard to be part wolf and not be able to feel her. When I'm shifted and touching the earth, I can feel her like a heartbeat. It's comforting.

9.  Is there anything you’ve always wanted to do but haven’t done? What would happen if you did it?

That's a tough question. I'm my own man, so I basically do whatever I want to. I think I wanna skip this question.

10.  What’s the worst thing that’s happened in your life? What did you learn from it?

War. It's nasty business. I saw some shit that really screwed me up for a long time. Two tours in Iraq, one in Afghanistan. Dead children. What did I learn? I fucking hate the war.
11.  Tell me about your best friend.

I've got a couple. I'd say Ty and Sarge are probably my closest friends. Can we not call them best friends? It sounds like we're about to slumber party.
12.  What’s the worst thing you’ve ever done to someone? Why?

I've killed them. I'm not proud of it, but it was the war, ya know?
13.  What would you like it to say on your tombstone?

No tombstone. Cremate me, please. Throw a party, don't do any of that somber shit where everyone's in black.

I'm thinking that whole ideal mate thing is just a myth. I somehow don't think there's anyone out there for me. It's a punishment for abandoning my position as Alpha, I think.

This goes back to the last question. Never being forgiven. I don't give a shit about my father but, it's hard to be alone.

16.  What’s the most important thing in your life? What do you value most?

My makeshift pack, I guess. I'd fight for them. Die for them if need be. What's more important than that?
17.  What do you like best about yourself? Least?

No matter what life throws at me, I move forward. The other side of that coin is that I keep things locked up tight. I wonder if that won't come back to bite me in the ass some day.

18.  How do you feel about your life right now? What, if anything, would you like to change?

It's a good life, for the most part. A little bit lonely. I don't know that I have time for a relationship, really, but it'd be nice at this point in my life. Settle down, have a couple cubs.

19.  Are you lying to yourself about something? What is it?

I don't think so.

20.  What trait do you most deplore in others?

I can't stand bullies. People who are mean just to be mean. That sets me off more than anything else. I can forgive a lot but cruelty isn't one of those things.

Michelle Roth is a novelist from the Great White North (Toronto, ON). When she’s not disappearing into foreign lands, or making two perfect strangers that she invented fall in love, she’s probably curled up somewhere with a glass of wine and a good book.
In her spare time she is typically hanging out with her awesome boyfriend and their two equally awesome cats. She likes taking road trips to nowhere in particular, cooking elaborate meals then making other people do the dishes, and being nerdy on the internet. Her books are currently available on Amazon, Nook, Kobo, and any other place that sells absolutely filthy romance novels.


Email: michelle@michelleroth.net
Posted by Allyson Young at 12:00 AM