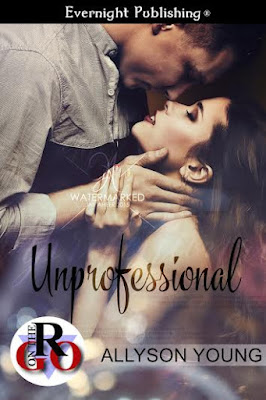 Unprofessional by Allyson Young
A Romance on the Go
Releasing: September 25, 2016 from Evernight Publishing

Blurb:
Hannah Evans is personal assistant to the very professional Benjamin Willis, and he keeps her firmly in that role. Her boss is a great man, and if he rewards himself with a large number of blondes, well, even great men can be misguided. Hannah couldn’t ask for anything more in her job—except she’s fallen for her boss. And now Mr. Willis seems to be seeking more than mere pleasure. What if he finds a woman with a beauty and brains? Unable to bear the idea, Hannah submits her resignation. Faced with losing her, Benjamin’s entire being reacts in shock, dismay and outrage, causing him to examine how he actually views Hannah. She has had months to come to terms with her strong emotions while he has had mere hours. But Benjamin is a quick study and discovers his true feelings for the woman who has been right under his nose.

Excerpt:
July 17
Dear Mr. Willis-
Please accept this as my formal notice of resignation effective two weeks from today’s date. I would advise that I have compiled a detailed document outlining the successful applicant’s duties and if time permits will certainly be willing to train said applicant.
I wish to express my sincere appreciation for the opportunity to work as your personal assistant for the past year, given my lack of experience.
Yours truly,
Hannah Evans
Hannah Evans

His fist crumpled the sheet of paper as if with a mind of its own, mangling the white velum and hiding the message from his disbelieving stare. A sick feeling gripped his gut and he replaced it with a mounting fury, the better to cope. Benjamin forced his fingers to relax and drop the letter to the surface of the desk, smoothing out the wrinkles while trying to get control. What the fuck was this about?
He wasn’t reacting specifically to her resignation. He’d come to that surprise after he figured out his absurd response to it. Several deep breaths, followed by some pacing around his office didn’t shed any light on the issue so he went with the reason for it. Rather than calling her, he yanked his door open and glared at her empty desk. Hannah—Miss Evans—he corrected himself, sternly, was down the hall again, in that excuse for a restroom. A chill raced down his spine. Was her resignation related to something about her health? Was she frequently using the last unfinished room in this amazing building he’d seen lovingly restored because of sickness? Worry curdled his belly and he peered in that direction.
As he cudgeled his brain for reasons why a woman might be ill, another thought struck him and ice replaced the fear. Could she be pregnant? His Hannah carrying another man’s baby?
Insanely, his cock leaped to attention as if in protest. Benjamin froze in place and stared down at the appendage that he’d never allowed to lead him around. He’d prided himself on it. Sex was an imperative; the more the better, the more inventive the better and he was wealthy enough and powerful enough to indulge himself. His taste in women leaned to tall, blonde, busty, and vacuous. Women who accepted his terms of casual and short term. Arm candy to show off at his many appearances, a release for afterward, and no pillow talk required. He had Hannah—Miss Evans—for that. Pillow talk wasn’t the correct description, of course, but his brain and quick mind appreciated their stimulating conversations. She was no shrinking violet and met him comment for comment, debate for debate, yet was only too willing to admit her weaknesses and if she was wrong. Not to mention how she competently fulfilled the rest of her role.
It was inappropriate to consider Miss Evans in even a vaguely carnal way. Highly unprofessional. What business was it of his to resent the idea of another man giving her a child, like he had a proprietary interest? And certainly thinking of her as his Hannah was wrong. Except she was his—his valued, personal assistant who lived up to every word she’d spoken in that brief summary of the job. Never intrusive, totally dedicated and hardworking, highly organized and intuitive. He’d meant it when he complimented her for anticipating his needs and taking such good care of him. His cock twitched at the thought and confusion addled his brain. The thought of her with another man…

Allyson will write until whatever she has inside her is satisfied- when all the heroes man up and all the heroines get what they deserve. Love isn’t always sweet, and Allyson favours the darker side of romance.