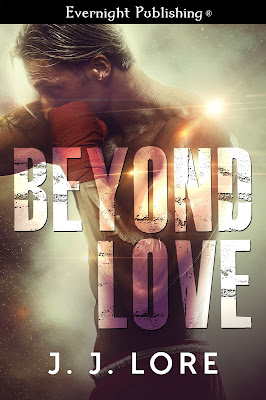 Today we’re presenting Author: J. J. Lore
1) Have you always wanted to be an author? No! This was a strictly middle-of-my-life-lets-try-something-new move for me. I was writing stories for my own pleasure as I hadn’t found much published that appealed to me, went to a writing conference, met some editors and took the plunge by submitted to them.
2) What genre(s) do you write? Sci Fi romance of all pairings. My characters tell me who they want to be with, and I make it happen for them. Sexy is sexy no matter if it’s a man and a man, a man and a woman, or a passionate mix of three.
3)  Have you ever self published? No, and it’s not on my list of things to do, at least in 2016. Maybe next year. Which I keep saying every year.
4) Who or what inspired you to write your first book? I don’t know! I simply like to write. I suppose basic inspiration is all the science fiction books and movies I consume, but I have never wanted to write anything based on worlds someone else has already created.
5) How many hours in a day might you write? If I get an hour or two per day, I’m a happy writer. Any more than that and the computer screen starts to blur, or I zone out on the internet.
6) Are you a plotter or a pantser? A bit of both. Before I write, I always have a backstory and character sketches, plus a basic structure, but the actual line-by-line scenes are always spontaneous.
7) Do you ever find yourself slipping away and becoming so immersed in your story it affects how you relate to others? Only when I’m editing, because that can make me short tempered. There are times when the story is pulling at me and I wish I didn’t have to do laundry or cook supper, but that’s more a function of preferring writing to housework.
8) Are you in any of your books? Facets of me are in every one of my characters, and sometimes my characters have personality traits I wish I possessed. Most of my protagonists are very duty-bound and that definitely comes from my own sense of responsibility and personal behavior.
9) Please share an excerpt from your book that totally spoke to you when you put the words down on paper.

Eidan had been enjoying himself immensely. Watching Teah’s outrage grow as her eyes sparkled and her cheeks flushed, had made him forget all about the bruises forming on his torso and the chill rain surrounding them with grim humidity. He hadn’t teased a pretty woman in far too long.

He’d taken advantage of her distraction and moved close to her, his body urging him to stay near, be as tactile as possible because everywhere he touched made him want more. She didn’t seem to be searching for an escape as she had upon their earlier acquaintance, but that might be because she was so aggravated. She frowned, and he braced himself for a snappy comeback or perhaps even a push to move him out of her orbit. Instead, she reached out a hand and grasped his shoulder all while she rose up on her toes and pressed her mouth to his.

Shocked at her actions, he failed to react for a few beats. Such tender lips, so sweet. The unexpected caress had him reeling, so when she drew back, still frowning, he took only a moment to decide return the gesture, and he wouldn’t be nearly so chaste about it.

He stopped her protest with a kiss of his own, circling one of his hands around the back of her head as he allowed the other to drop to her waist as he took over. With only a few nudging encouragements, she’d opened her mouth to him, allowing him to taste her, tease with his tongue in a new way as she quivered in his grasp. With a pent-up little moan she leaned against him, her breasts firmly pressed to his chest. His cock, which had been on alert since he’d first touched Teah, now sprang to near-painful attention.

Teah kissed him back, her little nips and licks the only encouragement he needed to lift her up and press her against the wall of the building sheltering them. He grabbed at her thighs and pulled them around his waist even as he ground his hips into her, his thickened cock sliding along the plump flesh between her legs. All the residual adrenaline from the fight ignited in his veins as he allowed sexual energy build between them. He wished he’d removed his damned gloves so he could finally grasp some of her curves.

She made a soft sound deep in her throat and clutched harder at his shoulders, her tongue teasing his then retreating to the safety of her mouth. He followed with a foray of his own and her whole body softened against his as he thrust his tongue inside her. A sudden flash of awareness filled him: Teah would melt against him when he penetrated her. She was incredibly responsive and he was certain when they finally had intercourse, it would be a fulfilling encounter. The way she suddenly clamped her thighs around him and rocked her pussy against the ridge of his cock only confirmed it.

The sudden chirrup of his alarm startled him, and he pulled away from Teah’s succulent lips, the need to return to duty overriding arousal in a painful snap. Teah’s head fell back and she blinked groggily as he answered his comm link summons. An emergency required as much of his attention he could provide even though he was in the middle of foreplay.

“Hey, Eidan! How’d the fight go?” His sister’s voice rang out in a cheerful query, and he winced. No emergency, just inopportune curiosity.

At his brief answer, Teah focused on him, then glanced down their tightly entwined bodies. A deeper blush rose up her cheeks, and she pressed at his forearms and wriggled her legs. Her movements were quite stimulating—everything about her was stimulating in fact, but it was clear she was trying to escape him yet again. In response, he tightened his grip on her full buttocks and she let out a tiny squeal.

“What was that? Are you still at the location? Do you need me to escort you out?”

“No.” He included Teah in that denial. She was staying exactly where she was. The woman in his arms sucked in a breath and pushed at his chest. He flinched because she happened to compress a new bruise and he almost lost his grip on her. She took advantage of his divided attention and kicked her legs. His cock appreciated the rhythmic motion.

“Let me down,” she whispered with a scowl.

“Who was that?” Brida asked quickly. No longer willing to put up with eavesdropping, Eidan reluctantly removed one of his hands from the lush curve of Teah’s ass and hit private link on the comm. Now his sister wouldn’t be able to hear anything but his voice. As soon as he let go of her, Teah struggled in earnest and with an agile twist she was free, ducking under his arm as he reached for her.

“Was there anything else?” he asked as he followed Teah along the walk. She picked up the pace, and he allowed himself the luxury of watching her hips sway.

“Not really. Just checking in to make sure my little brother hadn’t gotten his skull cracked open by some smelly human savage.”

At these words, Teah spun around suddenly, a thunderous frown on her face. “Smelly human savage?”

“You’re not a savage,” Eidan tried to reassure her, though the idea of Teah sinking her teeth into him as they engaged in a naked tussle definitely brought out the primal in him.

“No one’s a savage.” He nearly shouted it, frustrated that Teah wasn’t touching him and that his sister had used such a derogatory term so openly. Yes, they had joked about how primitive human society seemed, but it wouldn’t do to entertain even superficial judgments now that they were here among their new constituents. “Brida, I’m signing off.”

With a jerk of his hands he shut off the link and faced his peeved human.

“Don’t even think it.” Teah warned him off with a raised hand. She shuffled backward and eyed him like he was armed and dangerous.

“You don’t know what I’m thinking.” Eidan knew it was a lie, the bulge in his trousers clearly advertising what he was after.