Today we’re presenting Author: Nicola M. Cameron
1) Have you always wanted to be an author? No – my original career goal as a kid was to become a neurosurgeon. But that fell by the wayside in college when I couldn’t pass Organic Chem. I changed my major to English, and many years later after working as a technical writer I sold my first short story. Haven’t looked back since.
2) What genre(s) do you write? Various flavors of erotic romance (SF, fantasy, paranormal, historical, and contemporary, and all kinds of mixes in-between), as well as regular science fiction and urban fantasy.
3)  Have you ever self published? Yep! The first book in my Two Thrones series, Empress of Storms, had to be self-pubbed because it was written on a dare (long story). That turned out to be such a rewarding experience that the sequel, Palace of Scoundrels, has also been self-pubbed. 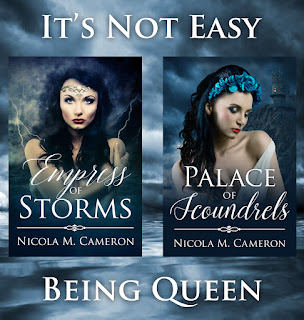 4) Who or what inspired you to write your first book? I’m an environmentalist who is very concerned with climate change. I’m also a fan of mythology, so one day I started wondering what various gods would think about what we’re doing to the planet, and how they would handle it if given the chance. That thought kicked off the initial concept for Storm Season (Book 1 in my Olympic Cove series), or as I like to put it, “Hot man on man action, environmental issues, nanotechnology, Greek gods, bioengineering, and Alan Turning – this book has everything!”
5) How many hours in a day might you write? It’s not so much hours as word count – I try to do 3K a day. Sometimes I can get it knocked out in a couple of hours, sometimes it takes longer. It all depends on what I’m working on and my mindset.
6) Are you a plotter or a pantser? Started off as a pantser, became a plotter with my first book because I found it easier to work if I could jump around in the story (and you have to know where you’re going in order to do that). Granted, I don’t always stick with the plot as written.
7) Do you ever find yourself slipping away and becoming so immersed in your story it affects how you relate to others? I know it would be romantic to say yes, but I can’t. I keep multiple universes in my head, so I have a very strong grounding to my “reality” state. I mean, I can’t even have sex with hot actors in my dreams because my subconscious steps in and reminds me I’m married. Boo!
8) Are you in any of your books? Ha! No, but a bunch of my friends are!
9) What do your friends and family have to say about you writing? My husband is incredibly supportive and thinks I’m a fantastic writer. My brother tends to be amused, and my sister says, “So, are you writing any more of that merman porn?” And my friends want to know where they can get my stuff. So it’s all good.
10) Please share an excerpt from your book that totally spoke to you when you put the words down on paper. I don’t think I really have anything like that in Palace of Scoundrels, but I can give you my favourite line (and yes, it’s a The Princess Bride in-joke):
“Thank you for not seducing my wife. I’d hate to have to kill you.”
“You’re welcome. I’d hate to die.”
From: Palace of Scoundrels 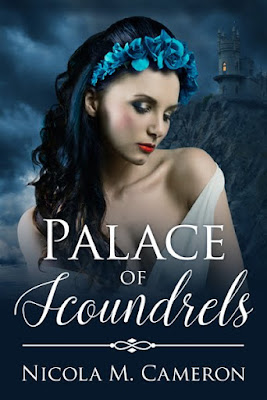 Spring has sprung in the island kingdom of Hellas, and with it come thoughts of young love and fruitful fields. But with no signs of an occupant for the royal nursery, Queen Danaë is starting to worry about her own fertility. Her concerns aren’t helped by the arrival of the legendarily conniving Dowager Queen Atilia of Illium–or the woman’s handsome grandson Prince Marcus, on the run after being accused of poisoning his older brother.

In the neighboring kingdom of Ypres, Danaë’s royal husband Matthias is dealing with dangerous family politics and a wolfish duke who has kidnapped a young noblewoman for immoral purposes. Or has he? Can Matthias ward off the threat of civil war, outwit his relatives, and deal with a charming rival in his wife’s own palace?


11) Which actor/character(s) would play the starring role? (you can attach pics or just insert names or both- pics can compete with the cover, but also pull in a lot of attention. Sometimes a pinterest link works well too, up to you)
And this is where it gets fun because I always cast my characters! In my mind’s eye Matthias is definitely Daniel Craig, while Danaë is a combination of Rooney Mara and Emilia Clarke (I swear to God I didn’t start reading OR watching Game of Thrones until after I was halfway through with Palace, and I had no idea Daniel and Rooney worked together in the English language version of The Girl With the Dragon Tattoo. GMTA). As for the other leads in Palace, they were heavily inspired by Downton Abbey, Mr. Robot, and Ru Paul’s Drag Race. :D 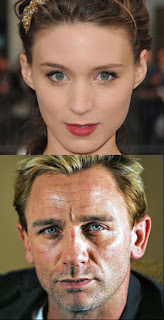 Matthias pulled Danaë into his lap, squeezing her close. She felt his chest rumble in rueful laughter. “Only you could fall into the ocean, be rescued by pirates, and wind up haring off with them on a treasure hunt.”

“Oddly enough, Father said much the same thing,” she admitted. “But it turned into a wonderful adventure. I even got my favorite tiara out of it, the silver one with the large pearl.” She’d also earned the unswerving loyalty of Captain Jason Constantinedes and his crew, who now served as her personal spy network outside of Hellas. After brief consideration she decided not to mention the days she had spent as Jason’s willing lover. It was in the past, and she didn’t want Matthias harboring a grudge against Jason if the captain ever had cause to come to Hellaspont. “They brought me back home with a wealth of knowledge about piracy on the high seas. Which is why I know I don’t want to be a pirate queen.”

“Thank the gods for that,” Matthias muttered, kissing her hair. “You’re rapacious enough as it is.”

She turned so that she could nuzzle under his ear, licking the salty skin there. “I never heard you complain before.”

She hummed, catching his earlobe between her teeth and nibbling on it. “Rapacious,” she whispered after she let it go. “I like the sound of that.” His breath caught as she traced spirals on his skin with the tip of her tongue. She could smell clean sweat, male musk, and something distinctly Matthias underneath it all. “Would you like me to show you how rapacious I can be?” she teased.

“Another night, perhaps,” She heard a promise in his voice. “Tonight, milady, I plan on doing the boarding.”

His arms tightened around her and he got up with a soft grunt, carrying her to the bed and dropping her onto the silk coverlet. She bounced with a giggle and rose up on her elbows, watching avidly as he pulled off his shirt and breeches. Regular riding and sparring matches with his guard had kept him muscled and firm, and she could spend hours running her fingers over the curves and dips of his body, particularly his broad, furred chest. The flickering light from candle and fireplace transformed the hair there into gold and amber sparks, trailing down his carved abdomen before spreading into a darker nest of curls around his rising cock. She rubbed her thighs together, feeling the delicious ache that always grew between them when he stripped like this for her.

He cupped himself, squeezing the shaft hard enough to make the sheathed head bulge. “Still want a statue of me?” he asked, with the cheerful arrogance of a man who knew he was desired.

She licked her lips. “More than ever.”

He glanced down at his swelling flesh and grinned. “You can’t scare me, you know. I’ve seen the kind of statuary you have in Hellas. I doubt anyone would bat an eyelash at it.”

“Bat an eyelash, no. Be violently jealous of me, yes.” It was her turn to tease, and she took her time unfastening the brooches that held up her gown. She slid the delicate fabric over one breast, then the other, letting it caress her hardening nipples. The sensation made her shiver. Cupping one breast, she rolled the peak between her fingers, imagining his hot, wet mouth around it. “The question is, what will your future subjects think when they see the statue of me?”

Matthias put a knee on the mattress. The movement made the furred sac between his legs swing a bit, and she reached out to cradle it, enjoying how he shivered at her touch. “The women will weep from envy, and the men will all fall in love with you,” he murmured, his voice rough and needy. “And none of them will ever have you.”

“No, they won’t,” she breathed, letting him push her onto her back. The ache between her hips grew, turning into a slow, sweet throb. “Only you, my love.

Nicola Cameron is an expatriate Chicagoan who has lived in England, Canada, Holland, and Sweden, and keeps a confusing amalgamation of languages in her head as a result. Currently located in the clavicle of Texas, she has finally mastered the proper use of "y'all," much to her Chicago family's dismay.