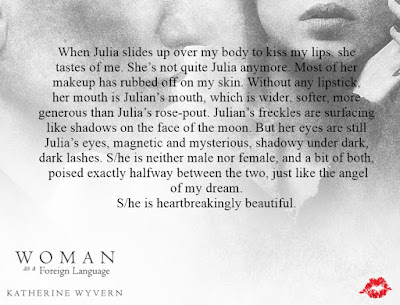 Thank you for having me on your blog today to tell readers about my new book, Woman as a Foreign Language.

This is the story of Nina, a girl who cannot express her feminine side and Julian, a man who is extremely good at it.

Nina is really an almost hopeless tomboy of a girl, who works as a welder. Among the many threads that make up this story, Nina’s art was the most fun to write, and several readers have asked me about it, so I thought I would take the chance to explain how it came about.

Aside from being Nina’s profession, the welding is an important aspect of her identity. Despite being a vulnerable and hurt soul, she is also a very tough and strong person, with a creative temperament. Steel may seem hard to work with but to her it is something she can use to make beautiful things, much to the astonishment of the more literary and impractical Julia/n. There are many strong female characters in romance books, warriors, CEOs, goddesses and shifters. Nina’s strength is in her welding.

Those who have already read the story were impressed by the metal working. I am rather chuffed with it, because Nina is a very autobiographic character, and all the metal-works descriptions in the book are really written from personal experience.

I hope you feel like finding out more about these two unique characters and their very unusual romance! 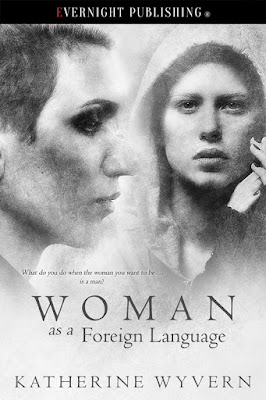 What do you do when the woman you want to be … is a man?

Nina’s abusive childhood left her feeling so vulnerable when wearing anything flimsier than combat boots that she has spent her whole adult life dressed like a gang boy. But when she meets the tall, glamourous, charismatic Julia (actually her cross-dressing neighbor, Julian, going out en femme), Nina is seized by an overwhelming and terrifying urge to finally express her own femininity.

Julia/n has not only a slightly split personality but also a thoroughly broken heart. What s/he wants most is a partner who will love both Julia and Julian. While Nina learns from Julia how to be a woman, Julian discovers that they might well be made for each other, but it will take a struggle against prejudice and a whole conservative mind-set before they can follow their hearts, and express their true, unique, and beautiful selves.

What do you do when the woman you want to be … is a man?

Nina’s abusive childhood left her feeling so vulnerable when wearing anything flimsier than combat boots that she has spent her whole adult life dressed like a gang boy. But when she meets the tall, glamourous, charismatic Julia (actually her cross-dressing neighbor, Julian, going out en femme), Nina is seized by an overwhelming and terrifying urge to finally express her own femininity.

Julia/n has not only a slightly split personality but also a thoroughly broken heart. What s/he wants most is a partner who will love both Julia and Julian. While Nina learns from Julia how to be a woman, Julian discovers that they might well be made for each other, but it will take a struggle against prejudice and a whole conservative mind-set before they can follow their hearts, and express their true, unique, and beautiful selves.

“Well, are we going out this evening or what?” asked Julia, seeing Nina sitting down still naked on the bed.
“Oh, it will take me two minutes to get ready,” said Nina, smiling up at her. “I am not such a woman as you,” she added, grinning impishly.
“Oh, indeed?” said Julia, and pinched her nose in passing, then went to the wardrobe to fish out some stockings, a pocket bra and breast forms. Boobs were invariably the first thing. She liked her body well enough, as a man or a woman, except for that flat chest. A girl should have tits, and a boy should have some muscle at least, but somehow, she had failed to achieve either. The sweet, soft, bouncy weight of the breast forms immediately made her feel better about herself. Stockings were always the next thing. Her legs were as smooth as silk in any case, but the sleek feel of stockings on them was almost an aphrodisiac. Time was, long ago, when she was much, much younger, when just wearing a pair of stockings would give her a hard-on. She was not such a green horn anymore, luckily, because the last thing she needed right now was an erection.
She stood in front of the floor-to-ceiling mirror, and pulled on her gaff half the way. She gently maneuvered her testicles back up to where they were before they dropped (if only they had stayed there, she thought despondently, and not for the first time), then gave her empty scrotum a slight twist and pushed it down and back towards her buttocks. She was on the point of tucking her penis down and under the same way (if she laid them side by side, they looked every bit like labia through her gaff … et voilà, instant pussy… more or less), when she caught sight of Nina’s eyes. Nina was still sitting on the bed, still naked, and gazing at her with those gorgeous gipsy eyes, studying everything Julia did and every inch of her body. Julia threw a look at her own lean, white figure in the mirror. She was standing with a hand between her legs and her gaff askew, half way between her knees and her hips, which felt somewhat less than graceful and dignified, and she wondered what Nina was seeing that was so entrancing.
“What?” she asked, smiling.
“Nothing. I did wonder where they went, when … you know.”
Julia grinned. “They don’t go very far, worry not.”
Nina stretched herself long, like a happy cat, still gazing hungrily at her, eating her with her eyes.
And suddenly Julia stiffened. “Oh dear,” she said.
“What?” asked Nina, in a somewhat comical echo of what Julia had said less than a minute earlier.
“Er … ahem. Stop looking at me. Just don’t. I can’t tuck it with a hard-on!”
Nina covered her face with her hands, vainly trying to suppress a fit of laughter. “I didn’t do anything. I didn’t!”
Julia was laughing too by now. It was hopeless. She let the whole lot hang out again and took two short steps to the bed (the gaff half-way up made it impossible to step out properly). She kneeled on the bed and started tickling Nina’s feet, the back of her knees and her sides.
“I didn’t do anything, I didn’t,” Nina repeated, between peals of laughter.
“Ah, but you were thinking, don’t deny that you were thinking.”
“Ok, ok, maybe I was, a little bit, please stop, stop, please!” Nina turned on her side, and curled up in a tight ball, still shaking with laughter. Julia stopped tickling her and pushed her on her belly, wiggled out of the gaff, then straddled Nina’s small buttocks and leaned down to nuzzle her neck and the back of her head.
“What were you thinking, you imp? Mh? What were you thinking?”
She bit gently into Nina’s earlobe and kissed her cheek. Nina smiled beatifically.
“That you are an elf, an angel, a goddess.”
“A female-female she-goddess? Really, with all this embarrassment hanging out all over the place like this?”
She let her cock and her smooth, smooth balls brush Nina’s buttocks, smiled and kissed her again.
“Always. You will always be a goddess to me,” murmured Nina, drinking in the kisses, her eyes closed. Her hand searched for Julia’s hand, their fingers wove together of their own accord, and Nina drew the hand closer to kiss Julia’s fingertips one by one, adoringly. Julia smiled and pressed her breasts down on Nina’s back, rubbing them gently on her shoulder blades.
She kissed Nina again and again, on her temple, cheek, eyelid, nose, the corner of her mouth. She was so precious. Sleek, small-boned, but fierce and sharp, like a bird of prey, hooded and caged, but never quite tamed. And I have set you free, and you chose to fly to me.
“I love you. Darling,” she whispered in her ear, in her huskiest, deepest voice, and Nina shuddered all over while her spine gave a twist, as Julia knew it would. Nina turned under her, to hug her and draw her body down. Julia moved her knees within Nina’s legs, and just like that, without any difficulty, her untimely erection found a place to go.
So wet. How can you become so wet just by looking at me? What do you see that nobody else ever saw? What do you see that even I don’t see? Julia sank her face in Nina’s neck, to kiss her, bite her, whisper in her ear, yes, oh yes, whisper and murmur and cajole, until my voice will make you melt, my love, my love, my love.

You can also find an exclusive excerpt on my website, here:
http://meetingivory.wixsite.com/katherinewyvern/copy-of-woman-as-a-foreign-language
And of course you can download the beginning of the story for free from Amazon!

Buy links, excerpts and samples:
Woman as a Foreign Language at Evernight:
http://www.evernightpublishing.com/woman-as-a-foreign-language-by-katherin-wyvern/

See what Katherine is up to on: