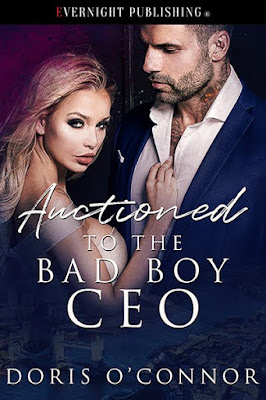 Hannah Watson has little time for romantic entanglements. After all, she hasn’t met a man yet who can beat her little battery-operated friend.
Until the new CEO arrives. Known for his ruthlessness in business, he’s also every woman’s wet dream—hers included. His temper alone should be a turn off, but her libido is not listening to reason.
Logan Bryce doesn’t tangle with his employees—ever—until curvy little Hannah makes all of him sit up and take notice. Who knew the starchy, always respectably dressed Ms. Watson had such a naughty side? Her proposal to auction off willing celebrities and suitable staff for a ‘date’ has appeal, especially with Hannah, herself, on the auction block.
The terms of the auction are clear—a twenty-four hour commitment—plenty of time to get her out of his system.
What can possibly go wrong?

“Because you were too busy playing slap the donkey with your schlong.”
“Schlong?” Logan didn’t know whether to be amused or offended at having his cock referred to thus.
“Yes, what would you call that?”
She glanced down at said appendage and attempted to cross her arms. No doubt to hide her body’s far too obvious reaction to him. It made him even harder, eager to lose himself in her soft body and to finish with her what he’d started on his own in the shower.
She accidentally grazed his cock with her arm in her attempt to hide her hard nipples from him. Like “come suck me” beacons they pushed against the satin of her gown, and made Logan’s mouth water with the need to taste them. How responsive would those little nubs be as he rolled them between his fingers, sucked them in his mouth, and bit down? Would she like that nip of pain, find it as much as a turn-on as he did, or would that be one step too far for sensible little Hannah?
Not that she looked very sensible now with her dilated pupils, and the fine sheen of arousal coating her skin. Her heart beat an uneven staccato at the base of her throat, and a groan escaped her full lips when he ran his nose along that sensitive area and inhaled. Her sweet scent, made more potent by her arousal, called him to bite down, to mark her in the most primitive of ways, but he couldn’t and wouldn’t do that without her consent.
To give into his darker desires was a two-edged sword, one he couldn’t allow himself to unleash, not now, perhaps not ever again. Certainly not with someone who worked for him, and with the hearing hanging over his head, he wouldn’t do anything to jeopardize his success there. He owed Claudia that much.
Logan pushed those thoughts down with the same ruthlessness that had made him so successful in the corporate world. They had no business here, not with sweet little Hannah his for the taking and his being so revved up that innocent skin on skin graze of her arm on his cock was almost painful. Predictably that part of his anatomy jerked. Giving into the demands of his body, he pulled back slightly, took her hand, and wrapped her slender fingers around his shaft.
Another one of those cock-hardening moans came from the woman he was holding a not so reluctant prisoner against his bathroom wall, and he tipped her chin up with his other hand to read her expression.
“I would call that my cock, and unless you really do want me to spank that delicious, round bottom of yours, I suggest you do something to help him out.”
Her digits tightened around his shaft, and Logan swallowed his grunt of pleasure.
“Like this, Sir?”
Her whispered question and the snarky intonation she put on that title made his dominant side roar. She couldn’t know what that did to him, and soon he was past the ability to think, because the feel of her little fist sliding up and down his hard dick, the little mewls she made as though this was a huge turn-on for her, too … fuck it, he was in real danger of shooting his load right there and then, and that just wouldn’t do. He wanted to come inside her tight little pussy the first time around, before he claimed every one of her other willing holes.
Logan fisted his hand in her hair and pulling her head back growled his instructions.
“Enough.”
He pulled Hannah’s hand off his dick and slanted his lips over hers. Her tiny yelp in response to his rough handling granted him access, and he pushed his tongue inside her mouth, while he angled her head just so. When her hands slid up his shoulders and she pushed herself against him, he lost what little restraint he had and kissed her in earnest. He tongue-fucked her, in a very good imitation of what he was aching to do with his cock, while he ground his hips into her soft belly, and, grasping a generous handful of her luscious ass, pulled her tighter into him.
Hannah did not disappoint in her response. She kissed him back with the same feverish desire that coursed through his veins. The need to fill his lungs with oxygen forced him to break the kiss, and, panting, he rested his forehead on hers.
“Let’s take this to the bedroom. I need to be in you, woman. Tell me you want that, too.”
He pulled away just enough to read her expression, and the sight of her kiss-swollen lips, her pale skin already marked by his emerging stubble was the hugest fucking turn-on so far. Still, he had to be sure she was on board with this, so he forced himself to wait for her response. When none was forthcoming, other than the sounds of her rapid breathing, he tugged her hair again, a little harder this time. Tears sprang into her azure eyes, but she also clung tighter and bit her lip.
“Don’t do that. It makes me want to bite you all over, right after I turned your backside raw for not answering me straightaway.”
If that was possible her eyes grew even wider. She whispered something that he couldn’t quite catch over the roaring of his own heartbeat in his ears.
“What was that? Speak up, little dove, or I shall take your silence as consent. After all, you did come and see me, and I warned you what would happen if you did.”
He pulled her plump bottom lip between his teeth and bit down. Hannah gasped and jerked, and he pulled back and licked that tiny drop of blood away. Her life’s essence exploded on his taste buds, made him hungry for more.
“Tell me you’re mine for tonight.”