Have you ever wondered what happened to your high school sweetheart? What would happen if you ran into him again when you returned to your hometown? 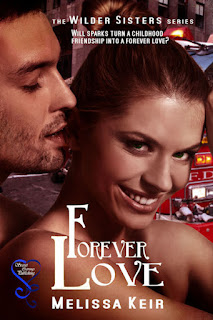 Fifteen years ago, Syndie Wilder left her small hometown- Amherst, Ohio- to escape the pain of losing her best friend and boyfriend. Deciding that Chicago offered more for an up and coming jewelry designer, she enjoyed the big city life until she chooses to return and care for her father. Taking care of her father and relocating her internet business, Syndie has no time or desire for romance but fate has a way of playing with best-laid plans.

Thom Johnson broke Syndie’s heart all those years ago and regrets it every day. As a firefighter, Thom sets out to protect Amherst and redeem himself for his bad choices. However, he never has forgotten Syndie and the hurt he caused her.

When a chance meeting happens, can the two former friends allow themselves the chance to become friends again, or will the sparks turn a childhood friendship into a forever love?

EXCERPT:
After getting out of my car, I hiked down the stairs. It was a mild September day, and the beach was fairly empty—just myself and a few seagulls. I walked slowly along the shoreline with my head down, not noticing the person swimming in the water until he began to climb out of the surf.

A dark, cropped haircut framed a face so beautiful that it could be described as the face of a Roman god. He had a strong nose and jawline that showed just a sprinkling of whisker stubble. However, it was his body that made me pause. His muscular shoulders and upper arms looked like they could carry a girl off to bed. His wet torso was covered with hair that immediately drew my eyes and tempted me to caress it. The chest hair tapered down his narrow waist and seemed to lead the way to paradise. I stopped walking and just stared. God, please let there be no drool dripping off my chin. This guy was smokin’ hot! Then he smiled and I noticed his face, complete with a little dimple in his chin. He seemed familiar, but I wasn’t sure where I recognized him from. When he saw that I noticed him, he winked as if he recognized me too.

“Hello! Nice day for a walk, huh? The weather has been kind to us this year.” He spoke and my knees wobbled. His voice was like chocolate, smooth and delicious.

“Hi…Yes…I’m glad the weather is nice enough to get out, but isn’t the water too cold for a swim?”

“Not at all. I enjoy my morning workouts after a long shift at the station. You don’t remember me, do you, Syndie?”

My mind was drawing a blank. How did he know my name? Who was this hottie?

“Not really. You do look familiar, but I can’t place you. I’m sorry.”

“It’s been a long time. We grew up together, our parents were best friends. We even went out in high school. I’m not surprised you don’t remember me, you hightailed it out of Amherst like your butt was on fire after graduation. We never saw each other again. I’m Thom Johnson, but everyone called me T.J.”

Oh wow. I’ve got a lot on my plate and he has changed over the years, but to not know someone so connected to most of my life was baffling. This man had been my best childhood friend. I was T.J.’s girlfriend for a while, but he dumped me for someone who put out. Before we went out in high school, I grew up with images in my head of him as the ideal guy. Our families encouraged our dating, thinking we were perfect together. When he dumped me, it broke my heart. I couldn’t stand watching him move on without me.

“Yes, I recognize you now, T.J. I took off because I thought that a big city had more to offer me. Well, it was nice to see you again. I had better get back to my walk, you seem busy.” I took off wanting to escape this awkward moment. Having to explain to T.J. why I was back in town was the last thing on my to-do list today.

I began heading back to my car, no sea glass having been found. Instead, I’d discovered the one guy who broke my heart and, based upon my initial reaction to the sight of him, has the potential to do it again. I backed out of the parking spot and headed back onto the main road into town, thoughts of T.J. occupying my mind.