Alex O’Loughlin is a man who just keeps getting better with age.

Born in Austrialia, Alex faced challenges in school due to his medical issues with OCD and ADHD. Dropping out of school at fourteen, he worked many jobs before finding fame and hunkdom on the small screen. No stranger to television or movie audiences, Alex has appeared in The Back Up Plan alongside Jennifer Lopez and even tried out for James Bond! His sexiness was first noticed as the vampire detective on the television series Moonlight. Too bad that the writer’s strike caused this show to be let go after one seaon. Even fans using a blood drive to get the network’s attention didn’t work. 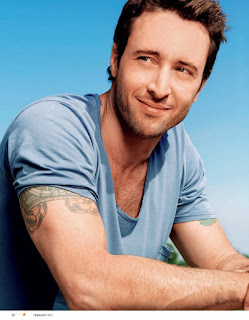 But it is his Monday night appearance that has women swooning and men wishing they were him! As Commander Steve McGarrett on Hawaii 5-0. As a hunky police commander, Alex gets to show off his gorgeous body and hot tats that are drool worthy. His sense of humor is also demonstrated on the show where he trades barbs with his co-workers on and off the camera. 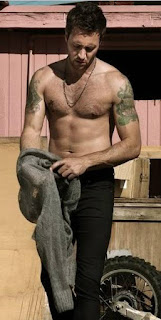 Alex is definitely a hunk and perfect feature for our T.G.I.F. Hunk showcase. Wouldn’t you agree?
Posted by Melissa Keir at 12:00 AM