Or as I like to call it, Sausage Fest and Lots of Explosions.

(scowling men in lots of body armor and major firepower. what's not to like?)
﻿
﻿
In case you are unfamiliar with this film, it's a great Ridley Scott movie from 2001 detailing the Battle of Mogadishu, based on a 1999  book of the same title by Mark Bowden. Very interesting, violent, and from my repeated viewing, including the exhaustive DVD extra, fairly accurate. I'd happily carry Ridley Scott's luggage wherever he wanted to because I'm such a fan of his, so I'm somewhat biased, but if you aren't into war pictures, let the cast impress you. 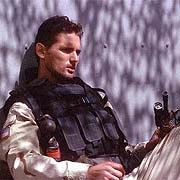 (aww...)
First up is one of my fave actors, Eric Bana. He plays "Hoot', but what most impresses me, other than the obvious attractiveness, is that his character SHOOTS a WILD HOG from a HELICOPTER and then he BARBEQUES IT! Okay, he's got marksmanship and culinary skills. All sorts of win there.﻿ 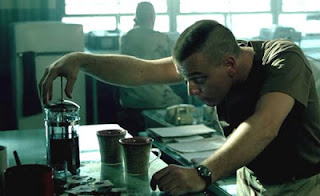 (sweetie, you can press my coffee anytime)
And then there is the lovely Ewan McGregor playing a clerk, Grimes, who goes on his first combat mission right into the middle of a hairy urban firefight. Bad timing there. But he knows how to make a proper pot of french press coffee, so again, major win. I have my main course and beverage managed, on to...﻿ 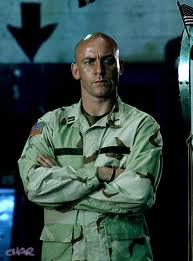 (I swear, I didn't do it. I'd probably like to though.)
﻿
Jason Isaacs, fulfilling my need for bald, hot, grumpy, and rule-oriented men who have no sense of humor. Yes, that's one of my things. Looking back, the first hero I wrote shared a lot of these characteristics, so thank you Jason Isaacs for the wonderful inspiration.

I had to put Ewan in again, he's simply adorable even when he's all mussed up. So if you don't like violence, explosions, and general carnage, just fast forward through it to watch these guys, And if they aren't your cup of french press coffee, the movie also features Josh Harnett and Orlando Bloom to name a few. See, I told you, total Sausage Fest.


I have no copyright on these images, so if you object or dislike or are offended, let me know and I'll remove.
Posted by Lynn Rae at 12:00 AM