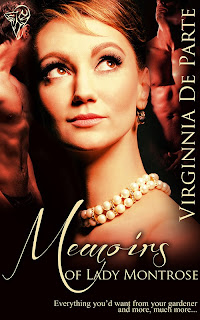 Blurb:
Lady Helen attends a Brighton Establishment to be sexually satisfied by their staff.  Her husband Henry pays for this arrangement and together they relive the descriptions of her experiences there.

This idyllic arrangement falls apart when Christopher Mortlock, from Brighton, recognises Lady Helen in London and endeavours to blackmail her. He is unaware of Lord Henry’s involvement and Mortlock’s blackmail plot is turned around to the benefit of all three of them.

Mortlock agrees to a new arrangement to satisfy Lady Helen’s sexual needs and is inventive and athletic in his labours as their gardener and employee; until the day he introduces her to ‘Fairy Dust.’ Lord Henry’s wrath descends to save Lady Helen from addiction and punish Mortlock for his audacity.

A sexual romp that will titillate your senses as much as it delights Lady Montrose!

Excerpt:
“Good evening Mrs. Brown” someone murmured at her shoulder.
Helen’s stomach lurched. Her heart leapt in her chest and pounded at speed.  Fear fizzed down her spine and turned her stomach over.  Only a small group of people knew her as Mrs. Brown and those people would not mix with, or be known to the present company. The cream of London’s society eddied around her, dressed to impress for their night at the Albert Hall. The interval afforded an opportunity to be seen and husbands attended with no interest in the musical recitals of Mozart and Chopin, let alone Beethoven’s Pastoral pieces.
She turned around, her gaze searching the moving crowd. Three men walked away through the theatre patrons, one younger than the others.  From the rear he looked well built with wide shoulders, dressed in formal attire and walking with a slight swagger. The voice she heard had sounded young. Could it be him? Even if she could see his face she wouldn’t recognise him.  When in the persona of  ‘Mrs Brown’ she always requested a blindfold.  If she had enjoyed his company, she wouldn’t know.
“Helen.” Charlotte touched her arm to attract her attention and she turned back to concentrate on the moment and get her nerves under control.
“Sorry Lottie, sorry.”
“Lady Helen, may I introduce the Honourable Stuart Whitmore, Member of Parliament for Minderhurst.” Charlotte indicated the gentleman who’d arrived while her gaze had been fixed elsewhere. “Mr. Stuart Whitmore, may I introduce you to Lady Helen Montrose.”
“I’m sorry, I can’t talk at the moment. Excuse me.” She inclined her head towards the fawning Member of Parliament and gave Charlotte a quick smile. “I must go, Charlotte. I’m worried about Henry. He was a little poorly when I left this evening.”
“But the programme is only halfway through.”
“I must go Lottie. I‘ve a feeling something is terribly wrong.”
“I’ll walk with you.”
They abandoned Mr. Whitmore M.P in the crowd. He would no doubt turn and inveigle his way into another group.  More important things weighed on Helen’s mind than the ladder-climbing hopes of a back bencher. Lottie accompanied her through the throng that filled the foyer. The combined conversations hummed like a nest of wasps.  They nodded politely to those who moved forward, hurrying past until they reached the entrance to wait for an available taxi.
“Helen, you’re quite pale.  Are you ill?” Charlotte had known her for many years but this was one secret Lady Helen could not share, even with her best friend. The nausea held its place, churning her insides and she couldn’t explain her pallor to Charlotte, no matter how desperate her need to share the burden. Only to Henry could she talk. “Are you sure it isn’t you who is feeling unwell?
“I’m fine Charlotte, just tired.  I’ll be happy to get home.” The driver waited, holding the door open. “Thank you for your company this evening.”  Helen gave Charlotte a quick kiss on her soft powdered cheek then climbed into the back of the black taxicab. Her heart-beat had slowed since the man had called her ‘Mrs Brown’, but the lump in her throat still hurt.  The sour taste of distress filled her mouth and her breath came in fast gasps as if she were panting.  She leant back against the upholstery and inhaled several deep, slow breaths in an effort to calm her apprehension.  Thank God Henry would still be awake when she got home.  She needed his wise counsel, his old frail arms around her, his liver-spotted hands stroking her hair.
She opened the taxi’s door, pushing notes in to the driver’s hand, Her relief to be home made her ignore the cabbie’s call about her change.  In her haste to reach Henry’s side she slammed their front door, the heavy oak connecting with a thud, and ran up the staircase to their bedroom on the second floor.
Friends of Henry’s considered her a ‘decoration on Henry’s arm’  and said as much behind her back, not loud enough for Henry to hear, but sufficient for her to catch the phrase.  Despite being thirty years her husband’s junior theirs was a love-match.
At first their age difference had meant nothing, but of late the effects of Henry’s age had torn a hole in their lovemaking.  Henry’s kindness and his concern for her physical needs was the foundation for the state of panic now coursing through her. She threw her evening wrap over the chaise longue, kicked off her evening shoes and climbed into bed beside him.
“What is it?” He tossed his book aside, reached and wrapped his arms around her to pull her close.
“A man called me ‘Mrs. Brown’ this evening. Someone from Brighton has come to London and recognised me.  It can only mean trouble , Henry.”
“Sshh.  Quiet, darling.  Let’s think this out.”
She rested her head on his chest and stretched beside him. He moved aside the bodice of her low cut dress to stroke her breasts with a smooth caress, his hands no longer the strong. With a soft touch he wrapped his hand under the giving mass, cupping it,  circling her nipple with his fingertips in feather-light dance.
“Did he say anything else?”
“No, I turned around but several men were walking away from me, one a younger man.    He had a thick mop of hair and his stride held an arrogance not seen in our circles  .  It could have been him, but even if I’d seen his face I wouldn’t have known who he was, Henry. You know I always wear a blindfold - so I can pretend it’s you.”
“Sssh,  darling.  Don’t panic so.”
Lady Helen listened to the steady, slow beat of  Henry’s heart knowing his thought process could not be rushed. After a minute he said, “No doubt he’ll try to blackmail you.”
She shuddered.

Aren't you shuddering too? You can pick up this book today. It's already getting rave reviews!